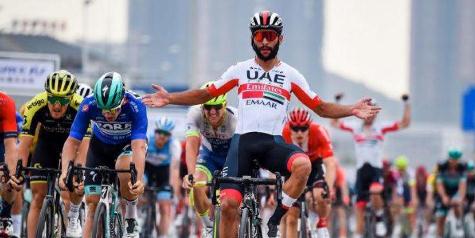 Colombian cyclist Fernando Gaviria won on Monday the second stage of the Tour of San Juan, in Argentina.

The fraction in which the Antioquia corridor was imposed had a distance of 168.7 kilometers with start and end in the municipality of Pocito, with a completely flat route.

Gaviria, who gave a sample of his experience, did not have a launch train in the final kilometers, so he kept an eye on what the other competitors were doing and in the absence of 500 meters he surprised his rivals by starring in an incredible attack that allowed to break through the right sector of the road, surpass the group and cross the finish line first.

With this victory, the leader of UAE Team Emirates got number 41 in his history as a professional in road cycling.

The second place was occupied by the Argentine Javier Nicolás Naranjo of the Agrupacion Virgen De Fatima team and third was the Italian Marco Benfatto of the Bardiani-CSF-Faizanè.

After the triumph, Fernando Gaviria assumed the first place in the general classification and moved the Frenchman Rudy Barbier to second place, while Álvaro José Hodeg is seventh.

This third stage will take place on Tuesday, January 28, which will be a 15.2-kilometer individual time trial with a start at Ullum and a final at Punta Negra.