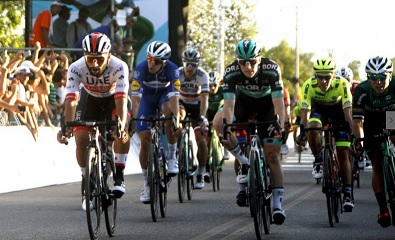 SAN JUAN, ARGENTINA. The Colombian cyclist Fernando Gaviria, of the UAE Team Emirates, won in an exciting sprint in Villa San Agustín the Slovakian Peter Sagan and his compatriot Álvaro Hodeg, in the fourth stage of the Vuelta a San Juan in Argentina. In this tour, a year ago, Fernando Gaviria had to leave as a result of a fall with the Argentine Ricardo Escuela, who was one of the favorites, Manuel Belletti and Rubén Ramos.

Twelve months later, the Colombian, who already won the first stage of this round in Argentina, showed the good time he lives with a prestigious victory by surpassing by just a few centimeters Peter Sagan, the triple champion of the road world.

The fourth stage of the Vuelta a San Juan was played between the towns of San José Jachal and Valle Fértil Villa San Agustín, on a route of 185.8 kilometers. Although the end was flat and, even, in slight descent, this stage supposed the first contact with the mountain, since in a short space three ports were raised, one of third and two of first.

Although it was the first day of mountain, it was not surprising that the stage was decided on the sprint and so it happened. Through the streets of Villa San Agustín the Quick Step pulled first with Richeze, Bora responded with Sagan, and in the last three hundred meters Gaviria, who seemed to have been left behind, burst out taking advantage of the wear of the runners of the Belgian set, which were the They put speed on the last line but did not know how to position themselves well at the key moment.

The sprint victory left the honey on the lips of the Argentinean Daniel Zamora and the Colombian Cesar Paredes, who along with the Peruvian Royner Navarro staged a breakaway of more than fifty kilometers that was neutralized to 2.6 of goal when there were already only two , since Navarro pricked a bit earlier.

With this victory, Gaviria cut time in the general to the Frenchman Julian Alaphilippe, who is still leading with eight seconds ahead of the Colombian. Third is the Italian Valerio Conti, twenty-two.

On Thursday there will be a rest day and the fifth stage will be held on Friday, February 1 between San Martin and Alto Colorado, on a route of 169.5 kilometers. (EFE).