Filippo Ganna goes for the hour record on October 8 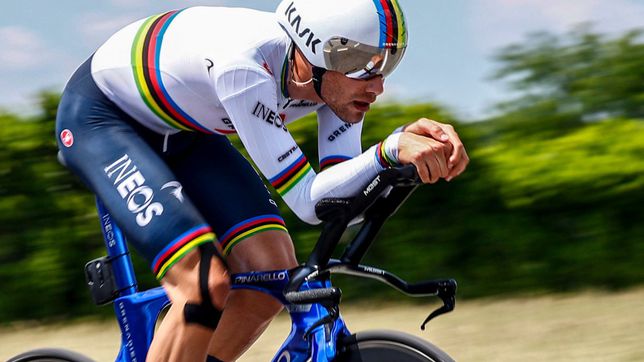 The Italian cyclist Filippo Ganna will try to break the hour record held by Ineos engineer Dan Bigham at the Tissot Velodrome in Grenchen (Switzerland) on October 8.

Ganna has already set a date for his long-awaited assault on the hour record, a challenge in which many believe that the Italian can achieve a historic record given his performance against the clock and his experience on the track.

The Ineos team has confirmed that the double time trial world champion will make his hour record attempt on October 8 at 8:00 p.m. European time at the Tissot Velodrome in Grenchen, Switzerland.

Ganna will seek to lower the record achieved by Ineos engineer Dan Bigham since last August 19, when he completed 55.548 kilometers during the hour he rode at the velodrome.

In statements collected by the Ineos team, Ganna was very excited about this very special challenge for him. “I am looking forward to this challenge, even though it will be an hour of absolute suffering. It will be very interesting to see how my body holds up and see how far I can go. It is an opportunity to test my physical and mental limits. Facing an event like this is an important step in my career”

For this, Ganna will have the innovations developed by Pinarello for his bicycle, Bioracer in his kit and Kask in the case with which he will compete, in addition to Continental tires and Fizik saddles. “I have been training on the new Pinarello bike and it is super fast. I’m lovin ‘it. It is one more step in the high level that we have with our equipment.

“The team has put a lot of energy and effort into these projects and our sponsors, from Pinarello and his new bike, to the fully tweaked Bioracer design, have played their part. Now is my turn. I will feel very good pedaling in this velodrome. Mentally that will give me extra meters for this challenge.” ‘The Giant of Verbania’ wants to destroy the stopwatch once again and this time he wants to do it in a big way to continue making history.