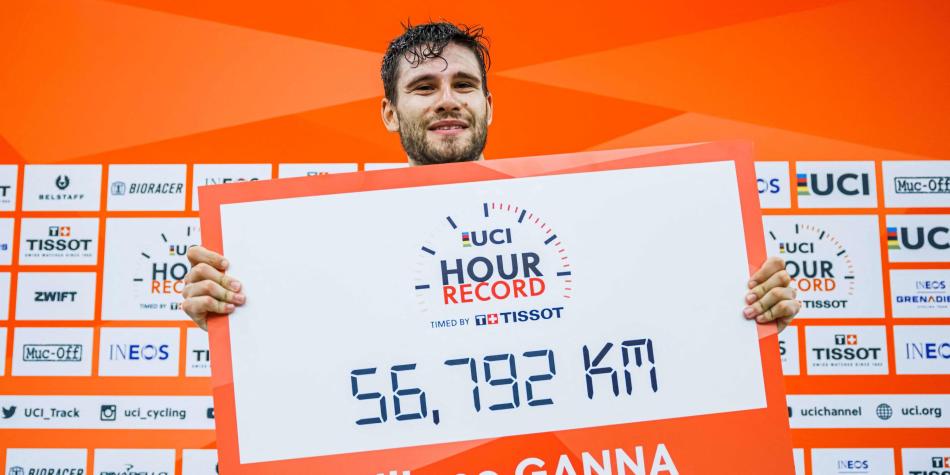 The Italian cyclist Filippo Ganna (INEOS Grenadiers) set a new hour record after traveling a total of 56.792 kilometers this Saturday, October 8, at the velodrome in the Swiss city of Grenchen. “It’s amazing, fantastic, I have met my goal. I thank my team and everyone who has contributed to this record,” said Ganna.

The double time trial world champion, in 2020 and 2021, thus surpassed the 31-year-old British Dan Bigham, who had caused the great surprise by achieving the hour record on August 19 with 55.548 kilometers, on the same track. Granges.

A former track cyclist, Bigham had attempted to break the record in order to collect data that could help Ganna in his quest for the record. And he finally got it.

After setting off cautiously this Saturday, Ganna progressively increased his pedaling cadence to finally achieve the best historical mark. With his performance, Ganna, 26, erases the mark of the British Chris Boardman (56.375 km), in 1996.

This distance had been canceled by the International Cycling Union due to a change in the regulations on the material. Ganna is the first Italian to set the hour record since Francesco Moser (1984),

Ganna has confirmed himself in recent years as one of the best riders in the peloton, adding four gold medals on the track in the individual pursuit at the World Championships and Olympic gold in the team pursuit event.

Reacting to his successful attempt, Filippo Ganna said: “Reaching this incredible goal is fantastic for me and all the staff who have worked for a long time to get to this result.”

Describing the pain of the last five minutes, he said: “I lost energy trying to get to 57, but nothing [in my legs]. It’s fine!” The new holder of the UCI Hour Record does not seem to have ruled out another attempt: “Next time maybe I will try it in another part of the season when my legs are fresher and we can go even higher… but now we will think about recovery “.

This Saturday’s mark serves Ganna to end with a good taste in his mouth a 2022 season below the expected one, in which he finished only seventh in the recent World Cup in Australia in the time trial mode.

Ganna was also beaten in the European Time Trial Championship and in the Tour de France his best position in this specialty was fourth position. In Granges he took advantage of a bicycle created for the occasion by the Pinarello brand with a 3D printed frame to improve aerodynamic performance, which helped him improve relative times with respect to Bigham from minute 20.

“The hardest threshold came in the last five minutes, I didn’t have enough energy to complete 57 kilometres. But it’s okay,” smiled Ganna.

In front of a noisy and committed public, the solid Piedmontese (1.93m, 76 kilos) crossed the line raising his arms before receiving congratulations from the members of the Italian track cycling delegation. After his record, Ganna will be able to extend his winning streak at the Track World Championships, in Saint-Quentin-en-Yvelines, near Paris, from October 12-16.