FINAL OF THE VUELTA A ESPAÑA 2020: RICHARD CARAPAZ 2ND IN THE INDIVIDUAL GENERAL 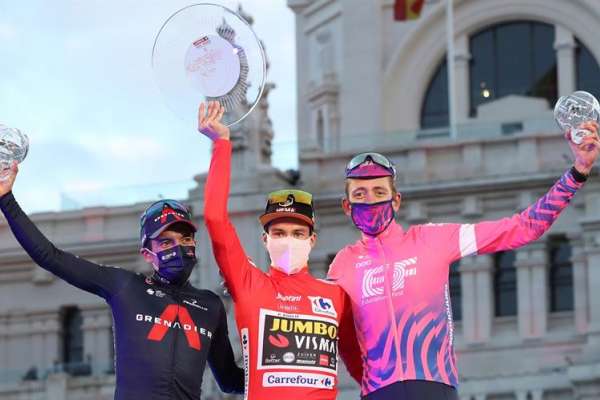 With a smile on his face, Richard Carapaz completed the last stage of the Vuelta a España on the morning of this November 8, 2020. The Ecuadorian took the podium of the competition, to receive the award as runner-up, in Madrid. “I am happy because I have left everything, it has been a beautiful ride, I enjoyed it a lot and I leave with the same smile with which I arrived,” said Carapaz before starting the last journey (139 kilometers), between Pozuelo de Alarcón and Madrid.

Carapaz wore the green jersey, as the leader of the points classification, despite being second in this table. This is because Primoz Roglic, first, is also the best placed in the general and wears the red jersey. The Ecuadorian once again avoided controversy with his former team, Movistar, when they asked him about his support for Primoz Roglic – winner of the return – in stage 17.

“These small stimuli of sport help to forget the sad moments that some of us have gone through,” said Carapaz, when asked about the reactions that generated his second place in Ecuador. Pascal Ackermann of the Bora-Hansgrohe was the winner of stage 18, after an emotional final sprint, in which he beat four competitors who had sought a frantic escape in the last kilometers. Roglic was the champion of the competition, with an overall time of 76:46:12, while Carapaz took the runner-up, 24 seconds behind the Slovenian rider.