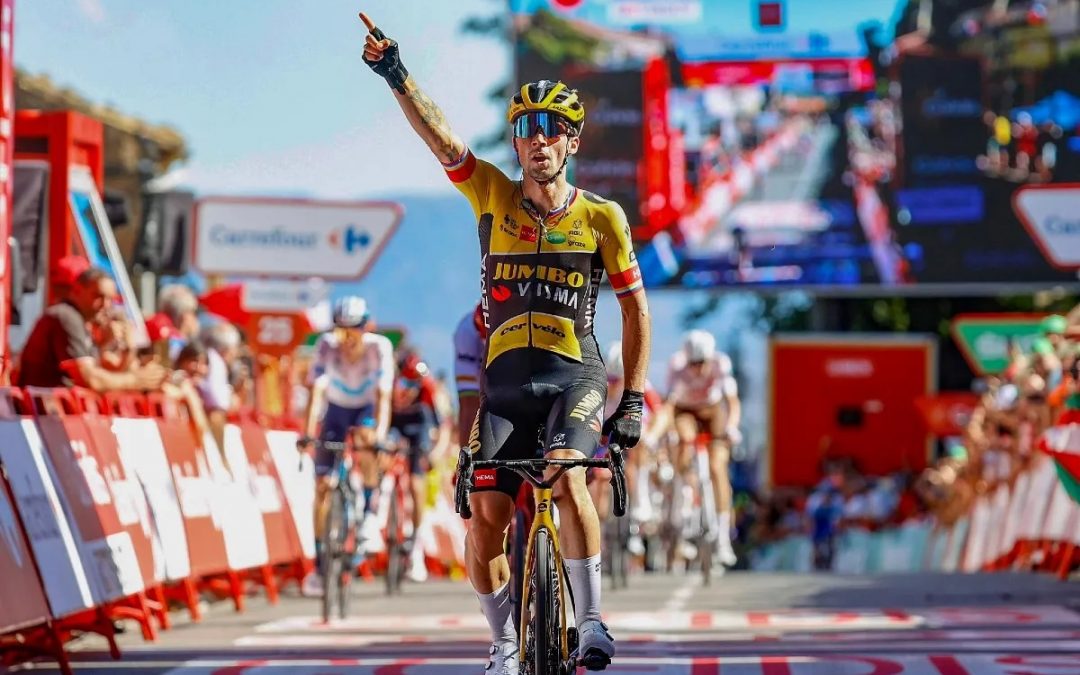 The fourth stage of the Tour of España 2022 allowed the ascent to the throne of the three-time champion of these classics, the Slovenian Primoz Roglic, while four riders from America remain among the first in the individual general classification: Seep Kuss (2nd), Richard Carapaz (7th), Brandon Munulty (16) and Sergio Higuita (21).

In an explosive finish and going uphill, Roglic (Jumbo Visma) won a 152.5-kilometre route between Vitoria-Gasteiz and Laguardia. The American Kuss (Jumbo-Visma) and the Colombian Esteban Chaves (EF Education EasyPost) were the best placed on our continent, entering positions 12 and 20, respectively.

The Slovenian from the Jumbo-Visma was the strongest in the demanding ascent, to take a resounding victory ahead of the Danish Mads Pedersen (Trek-Segafredo), who entered second and Enric Mas (Movistar), who crossed the finish line in third place . With the win, Roglic also took over the red jersey, which was in the hands of his teammate Edoardo Affini.

After three stages in the Netherlands, the multicolored caravan set off from Basque territory. At the start of the day, a leading group of six riders was formed with Alexey Lutsenko (Astana Qazaqstan), Alessandro De Marchi (Israel-Premier Tech), James Shaw (EF-EasyPost), Jarrad Drizners (Lotto Soudal), Ander Okamika (Burgos-BH) and Joan Bou (Euskaltel-Euskadi), but in the final stretch they were captured.

The Jumbo-Visma took the lead in the chase, along with the Bora-Hansgrohe keeping the escapees in check. Bou won the pass in Opakua and with the five points added there he placed himself at the head of the mountain classification.

Then the full platoon began the ascent to Puerto de Herrera, the second summit of the day. There, the lot began to lose quite a few units. Just before the top, Frenchman Julian Alaphilippe sped up, but Primoz Roglic reacted and took three bonus seconds. After cresting the climb, the Quick-Step Alpha Vinyl pulled hard to put pressure on the rest.

In the final stretch, Vincenzo Nibali tried to pull away with seven kilometers to go, but the main group held together until the last kilometer of the climb to the finish. The Trek-Segafredo worked hard to position Mads Pedersen, however, the Dane was easily outclassed by Roglic, who began to pave the way for his fourth consecutive title.

The work of the cyclists of America allowed the jump of two steps in the general classification of the northerner Sepp, the ascent to the seventh step of the Olympic road champion, Richard Carapaz; as well as a jump of 12 places by the American Monulty, while the Colombian Sergio Higuita advanced 20 places compared to the previous day.

This Wednesday, August 24, the fifth section of the Spanish round will be held, starting in Irún and ending in Bilbao, over a 187.2-kilometre route on undulating terrain, which includes 5 mountain passes passing halfway.