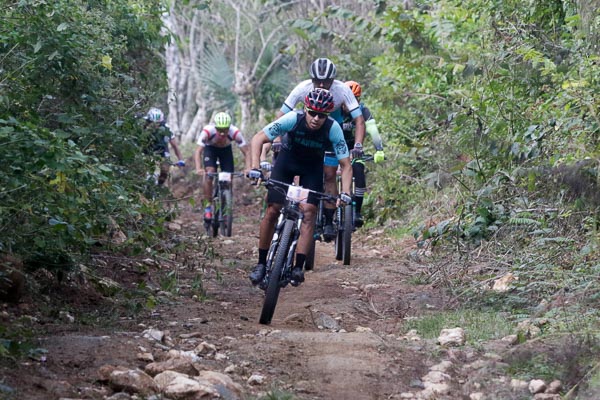 Sancti Spíritus.- The local Yoandry Freire, from the Los Manigüeros team, won this Friday the first stage of the Escambray Mountain Bike Challenger, run in a 30.9-kilometer stretch through hills and rivers between the Planta Cantú and La Hormiga campsites, the latter in the municipality of Fomento.

Freire set a time of one hour, 12 minutes and 48 seconds, and entered the finish line ahead of Ecuadorian Jorge Brito, also in the elite category, who covered the rough route in 1:17.43 hours.

In third place, Orestes Martínez, also from Sancti Spiritus, from the Veloz Estación club, crossed the finish line with a time of 1:17.44. He was followed by his countrymen Jorge Rojas (1:19.31) and Álvaro Cardoso (1:20.38), both from Los Manigüeros and Master Group A (M-A).

Very close, just as sweaty and varnished with dust, the route was negotiated by Dariel de la Torre from Havana (MA, 1:20.40), from the Destino Aventura team, and Joel Solenzal (1:21.16), one of the favorites to win. among masters B (MB).

In eighth place came the youthful Anderson Montoya (1:24.36), from the host group Los Verracos, who was not caught up by Alejandro Albuija from Cienfuegos (MA, 1:25.21) nor by his teammate from the elite section Lesniel Sánchez (1:25.38 ).

The ladies, who raised their presence to nine, had Yerani Morejón (Los Verracos) from Sancti Spiritus as the first winner with a time of 1:39.16 hours.

«I was surprised by so many women, it is good that they integrate more and more. I have always ridden a bicycle, but what I love the most is mountain biking. I aspire to make it to the Cuba team,” declared the daughter of former cyclist Pedro Morejón.

The 25-year-old girl was escorted by Kelly Méndez from Havana and Ludisneli Quezada, a member of the national team, who punctured one of her tires on the way.

A woman closed the figure of 62 competitors who took the start today at Planta Cantú. She wears the number 62 on her dorsal and responds to the name of María Carla Cabriela, from Havana.

Before the game, the “all-terrain vehicles” dedicated a minute of silence to the memory of the beloved Cabaiguán coach and cycling commissioner Jorge Carlos Hernández, “El Jimagüa”, who died last year due to covid-19.

On this first day, the Challenger Escambray had as special guests five representatives of the Cuban Trail Team, who left an hour earlier and ran the same route on foot.

Yuniel Castro González, a Sancti Spiritus resident in Barcelona and vice president of the group, thanked the company of his compatriots Chavely, Jorge, José Miguel and Higinio, the latter a sixty-year-old with an enviable sporting form. Everyone is part of the group here.

This Saturday the queen stage of the event will take place, when the brave squad faces the 70 kilometers of the most technically complex section, which includes the high ascents to Pico Blanco and La Gallega.

During the tour, departing from the cozy La Hormiga facility, they will pass through different rural communities, including La Guanábana, Güinía de Miranda and Jibacoa, to bump into the impetuous Escambray mountain range while skirting the Hanabanilla dam.