FRESA CELEBRATED IN PARCHMENT AND ACCEPTED IN THE GENERAL 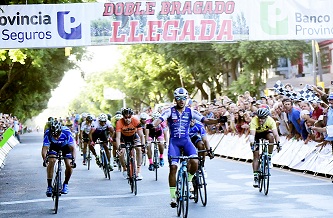 BUENOS AIRES. The Uruguayan Matías Presa of the Cycling Club Cerro Largo stayed with the stage in the Circuit 4 Avenues of Pergamino and approached the leader of the general of the 84th Double Bragado that for now is still Federico Vivas (SAT).

This Wednesday the 84th Double Bragado played the 4th stage in the Circuit 4 Avenues of Pergamino and the victory was in the hands of the Uruguayan Matías Presa (Club Ciclista Cerro Largo) who after 2 hours and 43 minutes raised his arms in front of Juan Manuel Gomes and Hernán Taddeo, both runners of the Giant.

The stage started neutralized in its first turns and then the peloton got the free way and started looking for the escape, but it became very difficult to undertake the adventure and the majority group was in charge of dominating the scene.

This Thursday, the race organized by the Club Ciclista Nación e Imagen Deportiva returns to the route to unite Pergamino with Junín, will be 190 kilometers with sprint goals in Salto and Rojas.

At the moment Federico Vivas (SAT) is still leader of the Sprint and the general goals and we must see how he evolves from the pain that afflicted him during the stage, besides Nahuel D’Aquila (Mirasal Citti Bikes) continues as the best Sub 23. (Adolfo Carrizo / Luis Rojo Mallea)