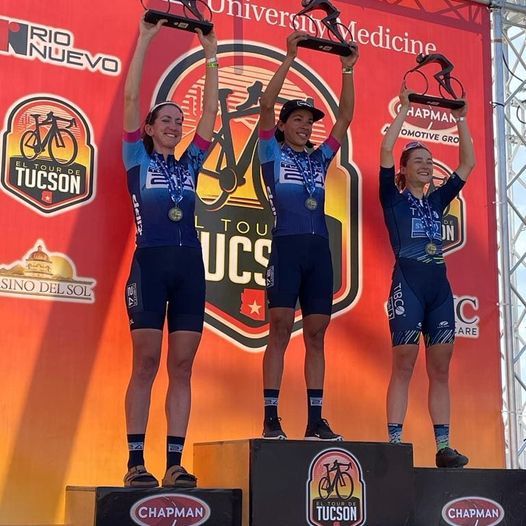 Two debutants in a long-standing competition, the Mexican Gerardo Ulloa and the Cuban Marlies Mejías, won this November 20 in the 38th edition of the Tour de Tucson, disputed over 102 miles and in which 6,715 competitors participated in the six distances summoned.

With no river crossings, no trains and no wind, the race seemed like a panacea for attendees, but an unexpected bus accident just before the finish line welcomed the group of nine riders in the last minute as they ran. to cross the line first.

The men’s final was so close that only four tenths of a second separated first and second place, so it took more than 30 minutes to determine the winner: the Mexican Gerardo Ulloa (3:57:44 hours), ahead of the locals Josh Rinderknecht (3:57:45) and Johnny Corcoran (3:57:45).

“It is the most outstanding victory of my career,” said Ulloa, a 25-year-old. “The end was the most difficult part, because it was very flat and we were quite tired and pedaling very hard towards the finish line,” he commented to the local press.

Women’s winner Marlies Mejias, a two-time Olympian, finished in a “shot time” of 3:59.22 hours, just over a second ahead of Veronica Ewers, while Paige Boldt finished with bronze (4:16 :twenty).

“I chose the men’s sprint pace, basically and I just kept it and crossed the finish line,” said Mejías, who also wrote on her personal Facebook page about the beautiful experience she had in the important American event.

“Thankful for the great opportunity, for not letting my dreams die. There is still a lot to learn, there is a lot to train, but I am happy, I know that there are still wonderful things to come. Happy to meet some great people on this trip. Now a trip home to see my loves. Thank you all ”, she commented on social networks.

The Tour of Tucson is the most significant perimeter biking event in Arizona that takes place each year on the Saturday before Thanksgiving. It is a fun adventure ride that attracts thousands of cyclists and has several categories.

The Tour de Tucson was founded in 1983 by cyclist Richard DeBernardis. The first El Tour drew 185 riders, but is now one of the biggest events in the bicycle industry, putting Tucson on the cycling map. The route winds through the city of Tucson and its environs with five mountain ranges, including those of more than 2,743 kilometers.