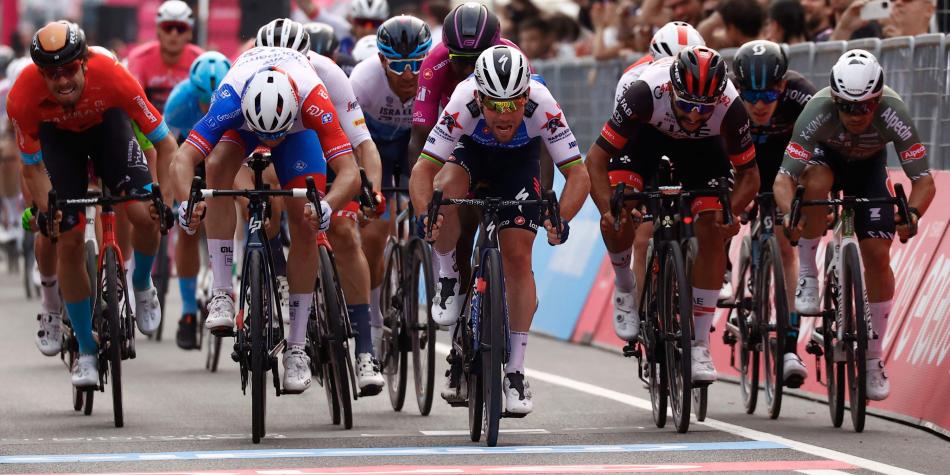 The British packer Mark Cavendish (Quick Step) won the final pack of the third stage of the Giro d’Italia, after a mostly flat 201-kilometre route between Kaposvár and Balatonfüred, the last in Hungary, where the Colombian Fernando Gaviria (UAE Team Emirates) was third and the Dutchman Mathieu van der Poel keeps the pink jersey.

Cavendish, 36, added the sixteenth victory of his record in the Giro, in his sixth participation in the Italian race, and reaches 160 stage wins in his 18 seasons as a professional; while Gaviria provided the best performance to date of a Latin cyclist, although the Ecuadorian Richard Carapaz (Ineos-Grenadiers) is still the best placed in the individual general standings with 15th place, 35 seconds behind the leader.

Sunday’s stage ran towards Lake Balaton, the so-called Hungarian Sea. In the first part, the runners approached the lake through slight undulations and upon reaching Nagykanizsa they turned around to return to Lake Balaton.

With only five kilometers to go, and with 196 to go, the movements began in the peloton, of which the only one that bore fruit was the escape of the Italians Mattia Bais and Filippo Tagliani (Drone Hoper) and Samuele Rivi (Eolo- Kometa), who staged the first escape.

It was in those initial stages of the stage that Jan Tratnik (Bahrain) got off the bike. The Slovenian, who was involved in a crash in the first stage, retired after suffering bruises and pain in his right wrist and hand. A very sensitive loss for the team of Pello Bilbao and Mikel Landa.

The change of rhythm that the three escapees gave them led them to enjoy an advantage of up to five minutes, an advantage that was reduced over the kilometers due to the push of the peloton, in which the leader of the group marched at all times career, Mathieu Van der Poel.

A few short climbs and descents brought the peloton back to the coast to tackle the final 50km, which was along the coast with only a short demanding section at Tihany Abbey.

The breakaway of three was reduced to two, with Bais and Rivi holding on until 28 kilometers to go, when they were neutralized by the peloton and the race accelerated without anyone showing their cards until the last straights.

The finish was pretty much flat. The final 500 meters of straight road featured an imperceptible climb to the finish line, which, as planned, was a good opportunity to see a sprint win.

Cavendish launched his attack quite far and was able to withstand the harassment of the Colombian Fernando Gaviria (UAE Emirates), the Frenchman Arnaud Demare (Groupama) and the Eritrean Biniam Girmay (Intermarché), who could not reach the British, very confident in his chances to lift the arms as the winner at the finish line in the Italian round, nine years after doing it for the last time.

The general classification did not change and Van der Poel remains first, with eleven seconds ahead of the British Simon Yates (BikeExchange) and the also Dutch Tom Dumoulin, at 16. This Monday the peloton will have its first day of rest and the competition will resume on Tuesday with the fourth part of the Italian round, which will be run over 172 kilometers starting in Avola and finishing on Mount Etna, the first top finish of the 105th edition.