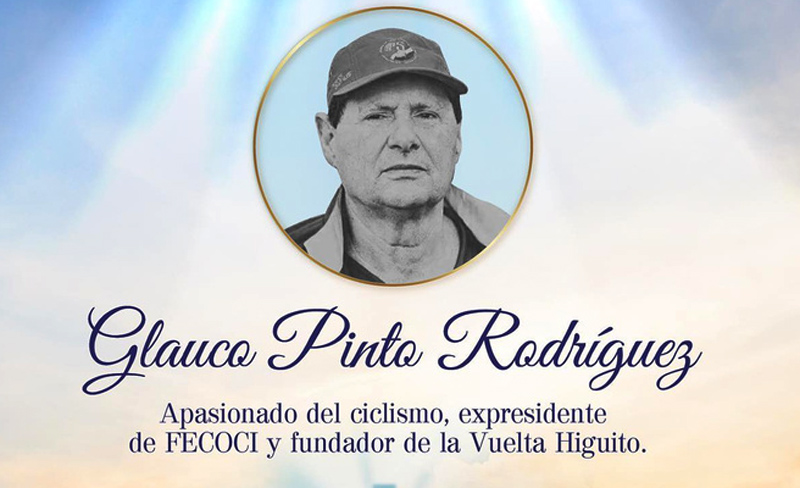 We share the chronicle published by the site www.crciclismo.com, dedicated to whoever was a promoter, director, former presidents of FECOCI and vice president of COPACI, who passed away on November 18, 2022 in his homeland.

It is a very sad day for Costa Rican cycling, one of the great pioneers of our sport died, Glauco Pinto Rodríguez leaves us body and soul, but his legacy will be indelible.

They spent 78 years sharing with his loved ones and 57 of them involved in cycling. Founder of the Vuelta Higuito, one of our top cycling events, former president of FECOCI, vice president of COPACI. In addition to performing in other roles as a commentator, sponsor and above all a passionate about the sport of wheels and pedals.

About Glauco, we could write a hundred pages, about his contribution to this sport, how he managed to bring great runners to compete in our country, his fight from FECOCI to get sponsors, but without a doubt what we will always remember is that human heat.

A legacy built by hand

His love for cycling dates back to 1965, when working at the Tropigas company, an employee suggested that he support cycling, something that undoubtedly led him to a new world, loaded with countless inspiring stories, led by humble young people who sought to change their life. good luck pedaling

From then on, he began a career of more than five decades involved in this sport, reaffirming his love for cycling with the creation of Vuela Higuito in 1983. A race that captured much of the history of national cycling, with 30 consecutive years. of organization in which the best teams in the area and cyclists of the stature of Mauricio Ardila, Carlos Betancour, Sebastián Henao and Darwin Atapuma participated, Colombians who years later shone in Europe. In addition to the unforgettable performances of Federico Ramírez, Henry Raabe and José Adrián Bonilla.

Of all the history of the Vuelta Higuito, Glauco always remembered one of the saddest moments, when a member of the Colombian team Indeportes Antioquia-GW Shimano, who was participating in the 2008 edition, died after being run over while training before the start of one of the stages. . As he assured CR CYCLING at the time: “It was the hardest thing for him while he organized the Vuelta Higuito”

While he organized and was in charge of the Vuelta Higuito, he was also part of the Costa Rican Cycling Federation as president, always trying to organize the best Vueltas a Costa Rica and travel with national delegations to the most important continental events.

Among his main achievements as president of FECOCI, is the donation of the farm where the famous Tagus is located, which generated so much money for the Federation.

Once his relationship with FECOCI ended, Glauco decided to sponsor cycling teams, as well as be a commentator on Radio Columbia, for many years during the Tour of Costa Rica. Many will remember Mobile 2, the Servigas mobile, because “No one gives you more than Glauco”

In recent years, his health condition has been deteriorating, after being diagnosed with Cervical Nerve Polyneuropathy, a disease that has taken away his physical faculties, but not the desire to witness the country’s cycling events. His memory remained intact and each conversation with Glauco became an accumulation of anecdotes and stories from those early years of the great national cycling events.

In 2018 he was dedicated to the Tour of Costa Rica, something that he thanked the Board of Directors at that time and despite his delicate state of health, he was present in several stages, enjoying his great passion, cycling. .

This November 18 his light went out, but his legacy will be indelible, Costa Rican cycling will always be grateful to the great Glauco Pinto Rodríguez, because we are sure that “No one will give him more than Glauco”.