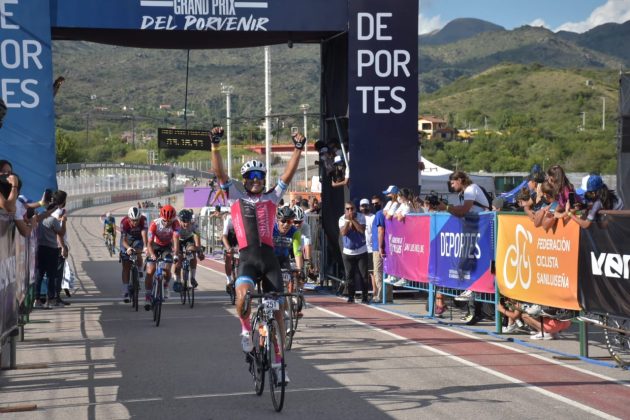 In an electrifying sprint and thanks to a devastating auction, Federico López (Shania Competición) won this Saturday with the Grand Prix del Porvenir that ran through the mountain circuit and had the international circuit of Potrero de los Funes as its closing point. Elbio Alborzen (KTM) and San Luis Nehuén Bazán (Electro Hogar) completed the podium.

The San Luis Bazán, in addition to his third place in the general classification, celebrated in the sub 23 category, in which he was first accompanied by Franco Orocito (Team Venzo) and Juan Pablo Bonfanti (MyG Servicios Petroleros).

The race brought together the best cyclists and teams in the country who gave a great show along 140 kilometers along the paths of Potrero de los Funes, Juana Koslay, San Luis, Cuatro Esquinas, La Petra, Estancia Grande, El Volcán and El Trapiche .

From the beginning the test had a great rhythm and with the running of the kilometers the candidates for victory showed their intentions. When the multicolored squad returned from Florida, there was a leak that was neutralized before entering the international circuit of Potrero de los Funes.

The demanding terrain and the work of the teams generated that the largest group was divided into three large batches and at the head of the race those who fought for the victory a few meters from the sentence line remained hand in hand.

There, the Riojan Federico López showed his credentials, his legs were pure power in the last hundred meters and his sprint was unattainable.

“I am gradually recovering my level. I had been doing things well, I hit the key and thank God it was given to me. The key riders had many brands, so I tried and was able to win, “said López shortly after crossing the finish line.

“Two escapees came, Ramos and a runner from Buenos Aires. I saw that they were not caught on the way up here in the second half of the circuit and I left to hook up, no one from the group moved, I hooked up and started to collaborate. And when there were 600 meters to go, four more came from behind, I got hooked on their train and with a hundred meters to go, I was able to finish off ”, added the winner.

“We have been preparing the Argentine Championship, I had the objective of improving, raising my level day by day and we are making it happen. The results have been achieved and we will continue on the right track. Now we will go to Chilecito, in La Rioja. We will see if we go to the Vuelta de Mendoza, it is not yet defined. But hey, today we won and we are happy. I have been working hard, like all runners, we are going to try to do a good job in that Argentinian ”, revealed the Chamicalense cyclist.