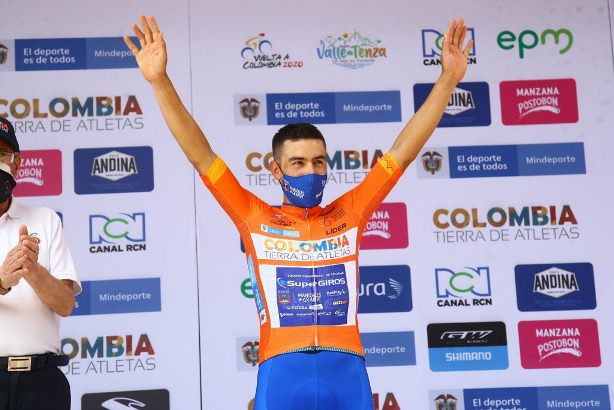 Bernardo Suaza (SuperGiros Alcaldía de Manizales) was left with a great victory in the first stage of the Vuelta a Colombia, which was completed this Friday with an intense 161-kilometer circuit in Villa de Leyva and is the first leader of the test that started successfully in Boyacá territory.

The winner was defined in the final two kilometers, a distance chosen by Juan Pablo Suárez (EPM Scott) to launch a strong attack, with the intention of anticipating his opponents and going for the victory. However, he found an iron brand of Suaza that came out with strength from the collective, in the last five hundred meters he hunted him down and celebrated a great victory to assume the leadership.

With a compact group in the last thirty kilometers of competition, there would be an incessant series of counterattacks, to which Colombia Tierra de Atletas-GW, EPM Scott and Team Medellín had to respond to keep the situation safe for their classification leaders general. Team runners, La Vega Mayor’s Office and Vías Engineering were the most incisive in the attack.

From the first kilometers, three men starred in the great getaway of the day; Camilo Castiblanco (La Vega Mayor’s Office), Nicolás García (Armed Forces), Johan Moreno (Colnago CM Team), men who were later joined by Steven Cuesta (Sundark Arawak) who would be the main protagonist in the scoring steps of the day, which allowed him to become the first leader of the modality.

Escape that was extinct 35 kilometers from the finish line, prior to the penultimate passage through the finish line, where the main group pounced on the leaders and hunted them down, always under the control of Colombia Tierra de Atletas-GW 4WD Renta Car, which in the final turn of the circuit, he took command of the group to bring his sprinter Nelson Soto into the most ideal position.

The second day of the national round, will depart this Saturday from the Boyacá capital Tunja, and will have Macanal as the arrival point, after traveling 161 kilometers of distance, a stage of great difficulty in which important differences are expected between the qualifying men general.