GUATEMALA: THE CYCLING TOUR IS NAME INTANGIBLE CULTURAL HERITAGE OF THE NATION 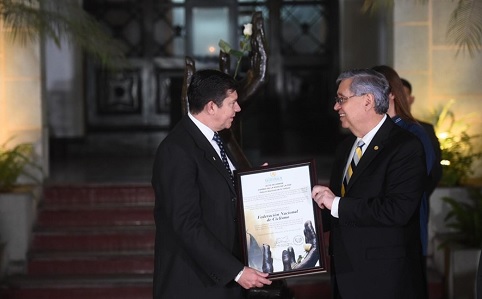 GUATEMALA CITY. The government authorities decided to declare “Intangible Cultural Heritage of the Nation” the event that every year receives the best cyclists in the country and America.

Through Ministerial Agreement 373-2019 of the Ministry of Culture and Sports, it was decreed that “the Cycling Tour of Guatemala” is hereinafter Intangible Cultural Heritage of the Nation.

This afternoon the protocol act is carried out, with the presence of the corresponding authorities.

The Agreement emphasizes that the cycling festival has been held for over 50 years and “has become a national festival of splendor and color.”

The participation of thousands of Guatemalans who go out on the various roads to observe the passage of the athletes and who make it “part of the Guatemalan culture” is also exalted.

The new Agreement establishes that now the Cycling Tour of Guatemala will have protection, defense, investigation and conservation measures.

Jafeth Cabrera was present at the gala and said he will be present in the first stage of the round.

The first stage will start in San Benito, Petén and end in Río Dulce in the department of Izabal.

Cycling fans should feel privileged since the Cycling Tour of our country is classified in category 2.2 and is part of the UCI America Tour, which is one of the five Continental Circuits created by the International Cycling Union.

It is organized by the National Cycling Federation, which is currently run by Stuart Rodríguez.

Stuart Rodríguez himself was the one who changed the rose of peace in the National Palace this afternoon. (publinews.gt)