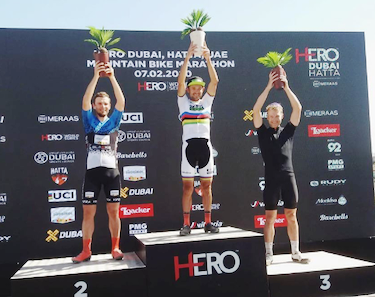 In the first of 3 races of the new Hero World Series held on February 7 in Hatta the current world champion in the Marathon modality, Hector Leonardo Páez of the Giant Polimedical, won by facing 20 competitors of the UCI men’s category. In addition to the triumph, the Colombian contributed 10 points that our country will continue to add in order to reach the Tokyo Olympic dream.

The Colombian made his first international presentation of 2020 together with 20 runners from 10 nations in the UCI men’s category on a 60-kilometer journey through sands and trails of the Hatta Reserve in the United Arab Emirates, obtaining first place with 2 hours, 7 minutes and 29 seconds, followed by Peter Pruus of Estonia who reached the finish line with a difference of 4 minutes and 28 seconds. 3rd place went to Czech Kristian Hynek who came to the sprint with Pruus.

In the women’s category the participation was lower with only 7 runners and it was Blaza Pintaric of Slovenia the winner of the race, followed by Karazina Sosna.

The 2nd race of the 2020 series will take place in the Dolomites on June 21 and will end in Thailand on October 11.