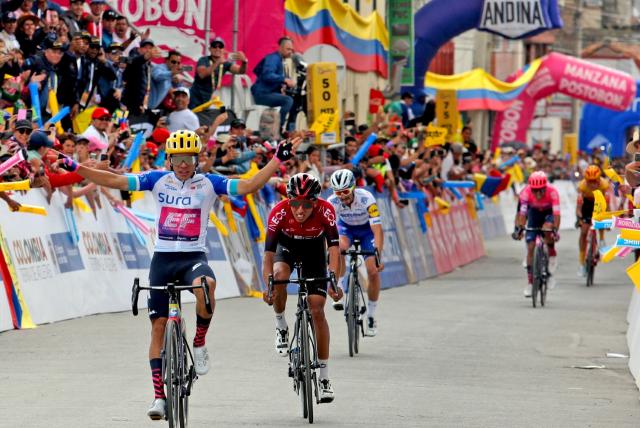 Higuita, who last week became a national road champion in Tunja, confirmed his good sporting moment in Boyacá by showing resistance, concentration and strength in the final kilometers of the day and, above all, ascending towards Santa Rosa de Viterbo.

The stage went away with a leak in the first kilometers. Simon Pellaud (Androni Giocattoli), Etienne Van Empel (Vini Zabu), Eduardo Corte (Canels), Kristian Yustre (Illuminate), Omar Mendoza (Col Tierra de Athletes), Sebastián Castaño (Pride Paisa) and Lauro Moro (Brazil) were who were at the head of the race most of the time.

The Androni cyclist won the first two mountain passes and kept the mountain shirt he had won in the third fraction. And the two special sprints went to Kristian Yustre of the Illuminate.

With 15 kilometers to go, the escape was absorbed by the squad and the compact group reached the third ascent, the third category mountain prize in the high Malterias. There, the race moved and the competition has a new leader.

The team that started shooting before the climb was the Ineos, the squad had four men but was left with two, as was the Deceuninck and Education First. The fight was between Egan, Carapaz, Jungels, Alaphilippe, Higuita and Martínez.

Missing two kilometers, Oscar Quiroz of the Land of Athletes tried to leave alone but Carapaz exceeded him. When it seemed that the Ecuadorian was leaving alone for the stage, from behind the French, the Antioqueño and the Zipaquireño came back.

In the goal Higuita was the strongest, beat Egan who came in second place and Alaphilippe who was third. Daniel Martínez, who had suffered a fall, crossed the finish line in fourth place and Torstein Train was fifth. With this result, the Antioqueño is the new leader of the competition, Jonathan Caicedo is second and Martínez third, the two to 10 seconds of Higuita.

The fifth stage will leave the department of Boyacá, Zipaquirá, in a 180.5 kilometer course and three mountain awards, two fourth and one third category.

You can access all the results in details and the rest of the information in the following link: https://www.copaci.org/event/america-tour-colombia-2-1-2/