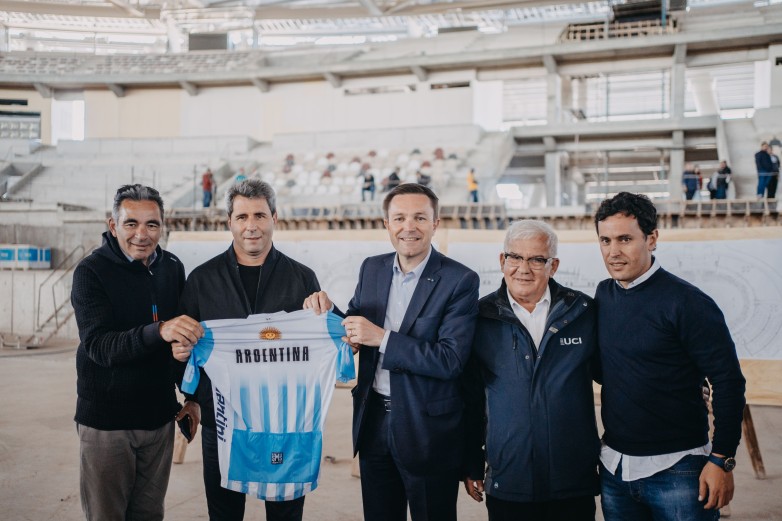 The governor of the province of San Juan, Sergio Uñac, together with David Lappartient, president of the UCI and other presidents of the Pan American Cycling Federations and Confederations, paid a visit to the velodrome under construction located in Pocito.

Upon arrival, the authorities were impressed by the magnitude of the work that has already reached 70% and praised its construction, the largest in America.

The deputy director of Architecture of San Juan, Miguel Ángel Toro, gave details of the tour and said that “the velodrome is part of a larger complex that is the Ciudad Parque de Deportes. It will be about 80 hectares where most sports will take place. infrastructure and to the south the tasks to set up a skate park have begun”.

For his part, Governor Uñac said that “this velodrome has all the characteristics to develop from World Cups to continental, Latin American challenges and we are dreaming of it not only for the present but for the future of San Juan and with all the characteristics that we allow the most important events in the world to take place in the province”.

He also added that “it will be the velodrome with the greatest capacity in the entire American continent and we are going to offer a probable scenario that cycling, which is one of the disciplines that San Juan residents love the most, can be developed in the province.”

“In San Juan everything that is winter cycling has been developed in the streets because we did not have a suitable velodrome, when it is inaugurated it will allow us to be able to make that route calendar and that will allow us to develop closed cycling”.

After the tour of the place, the entourage went to the Villicum to see the final of the competition.

The Governor of the province of San Juan was accompanied by the Secretary of State for Sports, Jorge Chica. On behalf of the UCI, its president David Lappartient; the interim director CMC, Jacques Landry and for COPACI, its president José Manuel Peláez; the MTB president, Ricardo Flores; the chairman of the commissioner panel, Héctor Fabio Arcilla. Also present was the president of the Argentine Federation of Track and Road Cycling, Gabriel Curuchet; the president of the Sanjuanina Cycling Federation, Juan José Chica and other presidents of Federations.