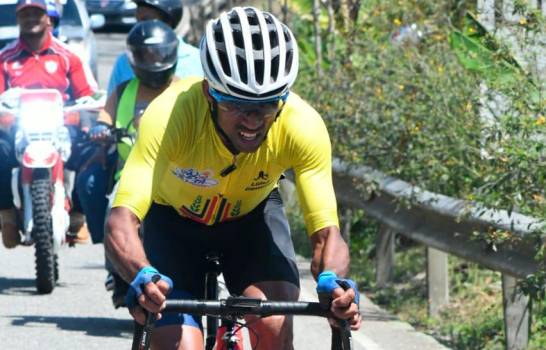 Ismael Sánchez seized the mountain, once again, winning the fifth and demanding stage queen, which leaves him close and comfortable to lift his fourth trophy of the National Independence Cycling Tour, when two dates remain to conclude the Dominican turn.

His work this Friday leaves the runner who has won several this stage, as one of the best riders of all time of the Tour and the most consecrated Dominican of this turn. “It was a great satisfaction to win this stage, I had my family and friends waiting for me at the finish line,” said the triple winner of the tour, always on a lathe wheel, but never like that when it comes to racing.

Sanchez, of the Aero Cycling Team (ACT), crossed the finish line in 3 hours: 40 minutes: 57 seconds to conquer the Santo Domingo-Bonao-Constanza stage with a distance of 136 kilometers, with an exit from Winston Churchill Avenue in the capital Dominican In that distance he increased his lead in the individual general now with 18:21:30, seven minutes and 21 seconds in front of his closest follower, Colin Patterson (VOFT). Diego Milan (INTEJA-IMCA) at 4:52 and Clever Martínez at 7:02, crossed behind the leader of the Tour.

In the absence of 35 kilometers to reach the goal at the top of Constanza, Sanchez deployed an attack that resulted in completing what he had planned at a stage in which climbing it every time is a new challenge.

“Even you don’t know how the body can respond to one,” said Sanchez He thanked the team for the support provided during all stages.

“When I was on the road, I knew that I had to give everything for everything, because my teammates have done the job so that I can be a leader,” said the runner.

The vegan rider, the most winner of this classic Independence, conquered the laps of 2012, 2016 and 2017 and now is coming to his fourth title of this championship.

The runner lives a dream moment as he maintains the leader shirt since the beginning of the Tour, on February 24, an event without equal in the three titles he won before. The ACT precisely also took the lead in the general team event after its performance in this heartbreaking stage.

Now he accumulates 55:36:12 and leaves INTEJA-IMCA at 14:08. “Everyone knows what they have to do. This team was formed with runners without jealousy of another ”, said Augusto Sánchez, Ismael’s partner in the ACT and winner of the Independence tour in 2018.

The Vuelta continues this Saturday with its sixth stage, a circuit in the monumental area of ​​Santiago de los Caballeros with an exit on Calle el Sol, to also cross the avenues Piky Lora, Las Carreras and Juan Pablo Duarte and at the end of the 20 laps will add 130 kilometers.