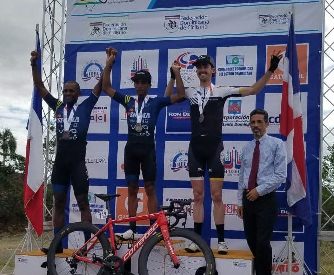 Ismael Sánchez, the historical leader of the Independence Cycling Tour, began the version of this year’s event in the same way his career has been: Winning.

Ismael, a three-time champion of the important Dominican turn, seized the main winners in the stage that left this contest inaugurated by becoming master and lord of the Santo Domingo-San Cristóbal-Baní-Santo Domingo stage, proof that culminated in the fig tree surroundings.

The native of La Vega, representative of the Aero Cycling Team keeps the energies in the wide path of the race under a burning sun and be able to raise his arms in triumph and immediately place himself at the forefront of this year’s fair cyclist .

“Our plan was to stay on the run, which was from Baní’s departure, along with Augusto Sánchez we were able to stay there, working for each other and finally being able to win the victory,” said Ishmael.

When winning this first day, Ismael highlights that in the front is to maintain a good pace to stay at the top of the race. The earlord remembers that on one occasion he lost control of the return in the first test, but on the following date he lost it to a representative of Venezuela. “He hoped it would be different this time,” he said. The event is dedicated to the Minister of Sports, Danilo Díaz.

Sánchez, winner of the 2012 versions; 2016 and 2017, recorded the distance of 156.2 kilometers of the route in time of three hours; 43 minutes and 53 seconds, arriving five seconds ahead of Colin Patterson of Voler Factory Team, while third place went to Augusto Sánchez, also a representative of ACT, Reyes Acevedo, of Inteja Imca was fourth and Bradley Wiggs of Voler Factory The team concluded in fifth; Clever Martinez of Asodocy New York was sixth and David Gaona finished seventh.

The event has the support of the Ministry of Sports, Dominican Olympic Committee, Gatorade, Economic Canteens, GBC pharmacy among other entities.

On his side, there were three mountain awards in the competition, the first two were won by Welington Canela, from ACT and David Gaona, from Cadance Cyclery won the third.

While the three Internediate Sprints were won by Diego Milan, the first; Deivy Chaplain won the second and Reyes Acevedo won the third.

By points and teams

When Ismael succeeds, he dominates the scores with 25, Patterson is second with 20, Augusto is third with 16, Reyes Acevedo is fourth with 14 and Wiggs is in fifth place with 12.

The first stage in the sub 23 was dominated by Kader Hopkins, of Puerto Rico / Bermuda, the second place is occupied by Steven Polanco, of Doglocy Inteja-Imca and Jesús Roniel Marte transits in third.

The 41st edition of the Cycling Tour began with the words of the Sports Minister, Danilo Díaz, to whom the event is dedicated and who was in charge of cutting the symbolic tape.

Díaz greatly emphasized the fact that the Cycling Tour is a very solid pastime and this is represented in the long stretch that has been taking place uninterruptedly.

“Any event that takes place without having a break for more than four decades deserves all kinds of respect, as this indicates that more than one generation that have sustained this activity over time and represents an honor for us

Meanwhile, that Luis Mejía Oviedo, president of the COD stressed that the Cycling Tour is one of the events that serves several purposes, one of them is that it reaches the villages, returns, a part of them, remains valid for more than 40 years , keeps the athletes in great shape, in short countless activities, ”says Mejía.

On his side, Jorge Blas Díaz, president of the Dominican Federation of Cycling, stressed that the Cycling Tour represents an icon of what national cycling is. “41 years of history that nobody can erase from the pages of Dominican sport, this is one of the longest events and we must all preserve them,” he said.

Blas said that this year’s participation with magnificent participation of riders, guaranteed that there will be a lot of competitiveness for the top positions.

The second stage of the Cycling Tour will be held on Tuesday, starting from the building that houses the National National Lottery on Independence Avenue and will have the route Boca Chica_ Juan Dolio-San Pedro de Macorís until returning to Santo Domingo, with the final goal the surroundings of the Faro Colón. The time to travel will be 162 kilometers.