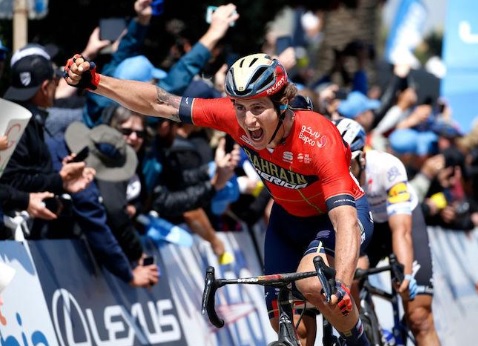 CALIFORNIA. The Spaniard of Bahrain Merida, Iván García Cortina, has won the fifth stage of the Tour of California (Pismo Beach – Ventura, 219 km), the US test of the UCi WorldTour, the highest category of world cycling.

The “guaje” premiered his professional victories in the best possible way and for this he had to defeat in the final sprint the Argentine Max Richeze (Deceuninck) and the Colombian, former Euskadi Foundation, Sergio Higuita (EF), second and third. Asgreen, Schachman, Bouhanni and company have not been able to surpass the Asturian.

Cortina has surpassed in a sprint of about 50 units to Richeze, who was the first to launch his attack.

In General Tejay Van Garderen, who was in the head group, he continues as leader. (biciciclismo.com)

The Dutch Anna Van der Breggen (Boels Dolmans), continues to dominate. The current world champion took advantage of the ascent to scarce five kilometers of goal, level of Ventura, to get rid of the control of the peloton with Lizzie Deignan (Trek Segafredo) and hunt the until then protagonist of the day, Olga Zabelinskaya (Coggeas Melter ), who pedaled solo during the last part of the stage. The Russian, worn down by the effort, accused the arrival of both rivals in the ascent and would soon be off.

The last obstacle for VDB was the British, which gave a good account just after crowning releasing his partner in the descent to goal and printing a strong pace in the solo ride to sentence the first round of three of the women’s test and first leader.

Second victory of the season after the classic ardenera of Flecha Valona. Finally the duo pursuer was absorbed by the sprint of the main group, in which Elisa Balsamo (Valcar) would finish in second position at 18 “and Arlenis Sierra (Astana) in third place. (ciclo21.com)