JARLINSON PANTANO, SUSPENDED AFTER A POSITIVE BY EPO 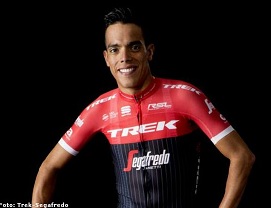 MADRID. The Union Cycliste Internationale (UCI) has announced this Monday that the Colombian cyclist Jarlinson Pantano (Trek-Segafredo) has been controlled “non-negative” by erythropoietin (EPO) in a control carried out on February 26, out of competition.

As detailed by the highest level of world cycling, the control was carried out by the Cycling Anti-Doping Foundation (CADF), an independent body appointed by the UCI itself in its strategy to combat doping in cycling.

Erythroetin is a substance that increases the amount of red blood cells in blood, facilitating the exchange of oxygen in the blood and therefore the resistance and performance in aerobic exercises.

Pantano now has the right to request the analysis of the sample `B ‘, the popularly known as counter-analysis, but which rarely returns a result different from the initial one.

In accordance with the UCI Anti-Doping Rules, the runner has been provisionally suspended until the resolution of the matter.

The US Trek-Segafredo team, in which the Colombian cyclist has been active since 2017, has been disappointed with the positive one and, applying its policy of zero tolerance, has immediately suspended Pantano.

“This is a very big disappointment for us, we continue with the policy of zero tolerance with doping and we will give more detailed information later on,” the team said in its official statement.

“We keep our cyclists and staff in the highest ethical standards and act accordingly,” they explain. (esciclismo.com)