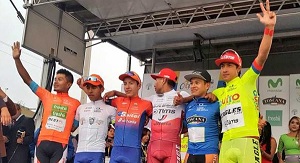 QUITO. The Ecuadorian Jorge Montenegro was awarded on Saturday 23 the XXXVI edition of the Tour of Ecuador and his compatriot Richard Huera won the last leg. Montenegro dominated the race from the second stage and Huera won two fractions.

The second place in the general classification went to the local Segundo Navarrete and the third was held by Rubén Urbano, born in Colombia, but who ran the Tour of the Ecuadorian Saitel team.

For his part, the youthful Huera, 19, won the stage today tightly, as the first four places timed 2 hours, 26 minutes and 52 seconds.

The contest brought together nine local teams, one from Colombia, and another Peru. The champion of flying goals, also Ecuadorian David Villarreal, finished in second place and his compatriot Luis Salguero was third.

Montenegro, from the Eagle Bike Tims team, won the mountain awards, with 44 points, followed by Huera, from the Saitel team, with 39, and Byron Guamá, from the local Tims Movistar, with 38.

The champion of the flying goals is Ecuadorian David Villarreal, of the Coraje Carchense team, with 27 points, which was followed by his compatriots Pablo Caicedo, of Coraje Carchense, with 13 points, and Jeison Rincón, of the National Police Cooperative, with 12. The team classification was led by Tims Saitel. He was escorted by Eagle Bike Tims and Movistar Tims, all from Ecuador.

The results of the Vuelta will also be valid for the conformation of the selection of Ecuador for the Vuelta de Colombia, next February. The contest began on Monday and toured four provinces: Pichincha, Carchi, Imbabura and Sucumbíos, with a route of 600 kilometers distributed in eight stages. (elcomercio.com)