José Alarcón great champion of the Tour of Táchira 2023 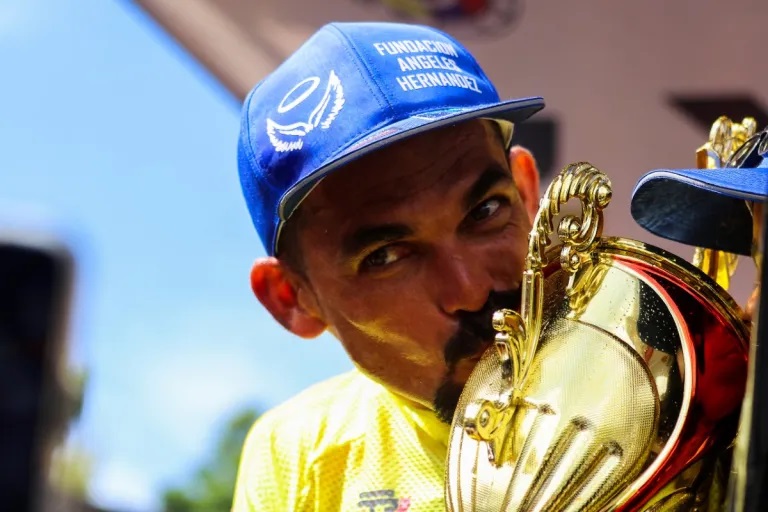 For the first time in his career, the Venezuelan cyclist José Alarcón (Ángeles Hernández Foundation) established himself as champion of the Tour of Táchira 2023, whose version 58 concluded this Sunday with the partial victory of Manuel ‘Gato’ Medina (Pegasus-La Guaira).

Alarcón finished this last segment at the JJ Mora Velodrome in San Cristóbal as leader after a stage of 117.3 km and eight days of competition with the positive return to Colombian lands after stepping on Cúcuta and Villa del Rosario after 26 years on the seventh day of competitions .

In a vibrant definition starting in San Cristóbal and finishing at El Velódromo JJ Mora, the title of the experienced Venezuelan cyclist José Alarcón was confirmed. The podium positions were completed by the Venezuelan Juan Ruiz (Gobernación de Trujillo), second and the Boyacá rider Juan Diego Alba, from the Ecuadorian continental group Movistar-Best PC, who climbed to the third drawer.

On the last day, the first changes took place with the compact peloton, but the fight for the sprint shirt meant that the race took place on a very tough circuit, with a repeated ascent and the last flat stretch to the finish line. goal.

In the final stretch to the finish line, Colombians Marco Tulio Suesca (Movistar-Best PC) and Jhonatan Restrepo (GW Shimano-Sidermec) distanced themselves from three other Venezuelan riders. In the definition, Manuel ‘El Gato’ Medina dosed his forces to win the last stage of the Giro Andino.

José Alarcón was one step away from the title on two occasions, but without being able to reach the goal; In 2009 he came out with the leader’s jacket in the closing stage, the circuit of the España and 19 de Abril avenues and at the end of the stage, Ronald “El Torito” González took the delicacy from his mouth.

A year later, once again glory escaped the then young rider born in Santa Cruz de Mora, but trained in Vigía, a land of great cyclists, his countryman José Rujano, the executioner, won the Vuelta by barely three seconds.

After winning this 2022, he declared to various media: “I had a group of very professional colleagues, they supported me in everything, especially the three-time champion Roniel Campos, who for me is proud that he has served as a cooquipero, after being left out of any possibility of aspiring to the fourth crown in a row”, he declared.