JOSÉ MANUEL PELÁEZ: “THE UCI SEMINAR HAS BEEN A SUCCESS” 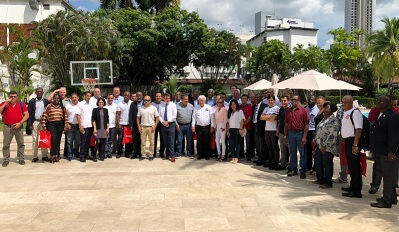 CITY OF PANAMA. The president of the Pan-American Cycling Confederation (COPACI), José Manuel Peláez Rodríguez, told RPC Radio that the UCI Seminar that has just ended in Panama City “has been a success, considering that those who gave it are the maximum authorities of the UCI”.

In dialogue with RPC Radio, the also vice president of the International Cycling Union (UCI), added that they touched “all aspects related to cycling; but in the case of doping, a very good and profound conference was given, with an eminently educational character “.

Peláez added that other topics contained in the agenda of the Seminar were linked to the Solidarity programs of the UCI and the International Olympic Committee (IOC), while recognizing the performance of Panama as a host country.

The UCI Seminar that just ended in the Isthmian capital was attended by representatives of 34 national federations of the American continent. (Rodolfo Jurado / Communication and Press COPACI / RPC Radio)