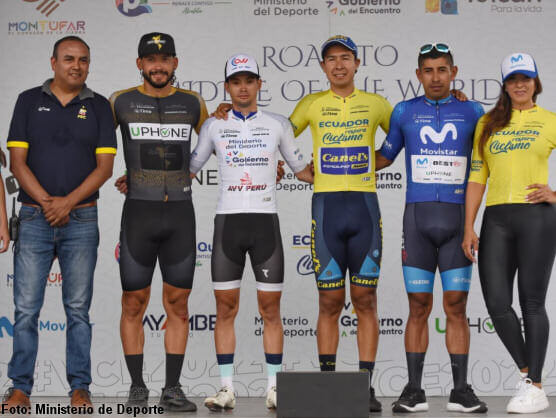 The foreign dominance continued in the Vuelta al Ecuador 2022. This time the victory corresponded to the Colombian Juan Diego Hoyos (Team Corratec América), who won the second stage by winning the final sprint, but could not take the lead of the individual general to the Mexican Ignacio de Jesús Prado (Canel´s-Zerouno).

The rider from Caldas took the victory in the second longest fraction of the Ecuadorian round, after traveling 203.6 kilometers between El Empalme and Puerto Quito in 5 hours and 34 minutes, escorted by Ecuadorians Esteban David Villareal (C&S Technology) and Wilson Haro (Banco Guayaquil-Ecuador), second and third respectively

The Mexican Ignacio Prado (Canel’s-Zerouno), who donned the leader’s jersey after winning the first stage this Saturday, remained at the head of the individual general classification of the Ecuadorian round, while the Colombian Juan Diego Hoyos deducted a few seconds for the bonus and approached the Top 3.

This Monday the third stage of the Ecuadorian round will be held, starting in Puerto Quito and ending in Calacalí, over a 121.9-kilometer route in mountainous terrain, the first high-altitude finish of this edition. The successor to Ecuadorian Wilson Steven Haro, last year’s champion, will be announced next Saturday at the Middle of the World.