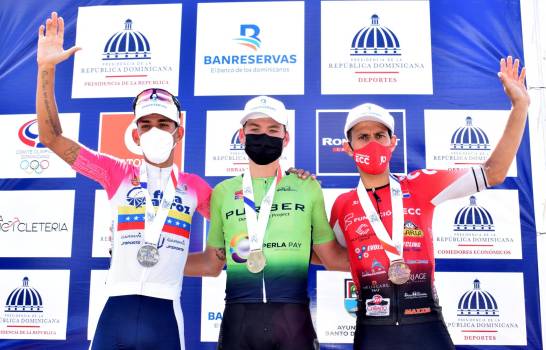 Julio Padilla (ECC Foundation) became the leader of the National Independence Cycling Tour on Wednesday when he came in third place, in an extensive journey that covered the Santo Domingo-Monte Plata-Santo Domingo section, which was won by Kaden Hopkins (Puerto Rico -Bermuda) with a time of three hours, 30 minutes and 45 seconds.

Padilla started the day four seconds away from Geovanny García (EDAC), who even opened the journey as the owner of the yellow shirt, which the Guatemalan now owns, now with a six-second advantage over Yurgen Ramírez (Venezuela, country of the future ). Padilla accumulates 11 hours, 3 minutes and 20 seconds.

At the end of the day, García dropped to one minute seven seconds, when the Independence tour enters its fourth date this Thursday.

Hopkins crossed the finish line alone, Robert Sierra (Venezuela country of the future) followed him eight seconds behind and with the same time Padilla did so to attack the yellow jersey.

The three made a surprising getaway in which they broke away from the peloton for 80 kilometers, but Hopkins was even more decisive, after traveling the last 40 kilometers alone until crossing the finish line, where he was almost absorbed by a hungry squad chasing the goal. , located in the ring road of El Higüero.

Before arriving in the municipality of Sabana Grande de Boyá (Monte Plata) Hopkins came alone, followed by the two with whom he shared the podium.

In this route, characterized by a flat route, there was also variation in other places of the leadership. Yurgen Ramírez (Venezuela, country of the future) ranks second at six seconds and Juan Borstelmann (VOFT) at 11 seconds. The three were part of the great escape of 80 kilometers, knowing that the time accumulated by Hopkins would not affect them in the general individual classification table either.