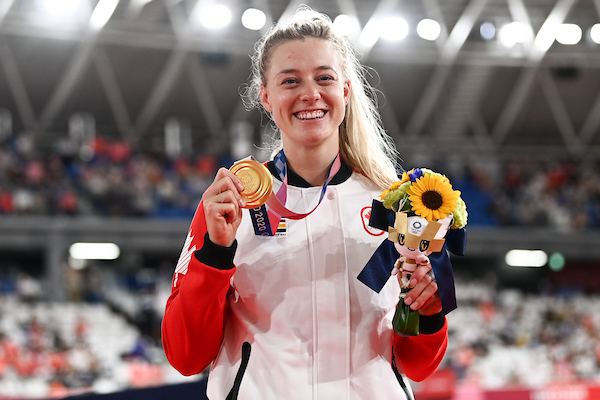 In an unbelievable finish to her first Olympic Games, Kelsey Mitchell won Canada’s 24th medal and second-ever gold medal in the women’s Sprint on the final day of track competitions.

After going head-to-head in the quarterfinals with teammate Lauriane Genest—who won a bronze medal in the women’s Keirin earlier in the week—Mitchell advanced to the semi-final round to face World Champion, Emma Hinze, of Germany. Mitchell would go on to win the first race of three before being defeated in the second only to win the third. The Canadian advanced to the gold medal final to overtake Ukraine’s Olena Starikova, winning the first two races and becoming the Olympic Champion.

“I really, really wanted to get it done in two, and I got it done in two, which is a really rare since I usually end up going to three,” said Mitchell describing her gold medal final. “Canada’s a threat, and I think we proved that here. We’re strong and we’re some of the best in the world.”

Mitchell’s medal marks the first cycling gold medal since Lori-Ann Muenzer won the event at the Athens Games in 2004. The Olympic Champion took up the sport in 2017 through the RBC Training Ground program and quickly rose through the ranks, eventually winning the 2019 Pan American Games and becoming a World Record holder in her pursuit to making the Tokyo 2020 Olympic team.

Allison Beveridge and Lauriane Genest also completed their final day of racing at the Izu Velodrome, with Genest taking 8th in the women’s Sprint 5-8 finals. Meanwhile, Beveridge was back on the track after breaking the Canadian record in the women’s Team Pursuit to race in the Omnium where she finished in ninth with 78 points.