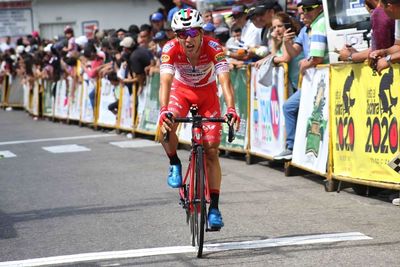 The Costa Rican Kevin Rivera handed him in the individual time trial of the Vuelta al Táchira, the fourth victory to Androni Giocattoli in the tachirense round, which continues to have Roniel Campos (Deportivo Táchira) as leader for the second consecutive day.

Rivera that imposed an indestronable record of 26 minutes 19 seconds, for the 16.1 kilometers of this day that took place between San Cristóbal and Palmira. The second position at 13 seconds went to Carlos Galvis (Deportivo Táchira) and the third to Ecuadorian Jefferson Cepeda who made an important promotion in the general classification, followed by the Colombian Jhonatan Restrepo who was fourth to 17 seconds.

The general classification did not suffer major variants in its main positions, Roniel Campos (Deportivo Táchira) is still a leader, followed by 2 seconds by his teammate Juan Ruiz and 54 seconds by Ecuadorian Jefferson Cepeda (Androni Giocattoli).

With a high mountain day between Ureña and Cristo Rey, over a distance of 117 kilometers, the seventh day of this Tour will be fulfilled this Saturday. Crucial stage, which will serve to define the main contender for the final victory.

Full results can be found at: https://www.copaci.org/event/america-tour-vuelta-al-tachira/