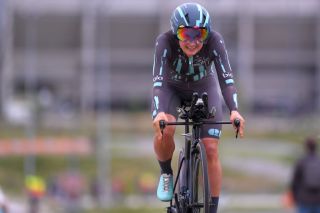 Mavi García, Katie Hall, Katrine Aalerud, Erica Magnaldi and Leah Thomas have starred in the escape of the day.

The American Thomas has been the fastest in resolving the stage, while Mavi Garcia has been able to climb to seventh place overall, dominated at all times by Anna van der Breggen.

The rest of the American runners in the stage were located as follows: Arlenis Sierra Cubana del Astana in position 14, in 16 the Canadian Boels Dollman, Karol Canuel, in 36 the Trinidadian Teniel Campbell, the Paraguayan Agua Espinola in 47, the Mexican Yareli Salazar winner of the previous stage Abandoned in the today.