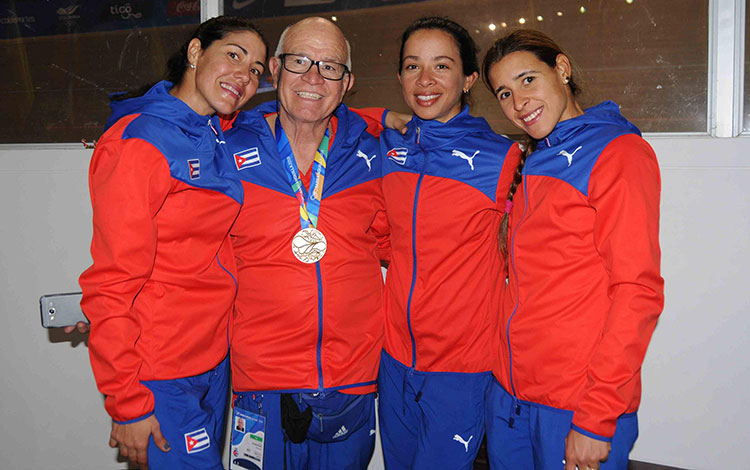 Tokio.- Since I have known Leonel Álvarez, no one calls him by his name, but by his nickname: “El chino”. He says that from a meniscus injury when he played basketball at the cycling house, back in 1970, he changed the athlete’s bicycle for a coach’s motorcycle. In these functions, he has already completed 51 years of work, with medals at all levels, including the only Olympian, from his student Yoanka González, in the 2008 Beijing points race.

He speaks slowly and always laughs. He goes back to his first five-ring date in Barcelona 1992 with the men’s track team, in which they came close to achieving a medal in scoring through Conrado Cabrera. “But he needed 25-30 meters to catch the peloton and get a lap out of it and that’s where the podium went away.”

Years later he would go on to command the elite female platoon of this discipline, a “difficult but beautiful job; nice and complicated at the same time ”, in which he has had to deal with boyfriends, parents, friends and suitors. He has been a counselor and a coach at the same time, as he quickly learned not to provoke even the slightest jealousy between them, “because they are very susceptible if they see you talking to one and not another, if you smile with one and not the other …”

It is difficult for him to admit for his modesty that he has earned the respect, trust and admiration of that women’s team. They congratulate him on his birthday, make jokes and above all trust in his technical ability. “That necessary and essential chemistry to work has been achieved. It is also many years. I have been practically more with them than with my family ”.

He risks defining the names I mention to him with a characteristic. “Yoanka: perseverance; Yumari: willful; Marlies: explosive; Arlenis: strength ”. He breathes a sigh of relief and quickly releases the next piece on the question of the moment that he holds with the most affection of all those lived in more than five decades.

“There are many, even sometimes that did not finish in medals, but without a doubt, Yoanka’s Olympic silver is a reference. She was sprinting stronger than Marianne Vos at the time, only she surprised her by getting the lap out of her and there she defined her career. However, that day she was very exciting. “

The memory of her even makes him go back to the beginnings of working with women, stages in which training was shared with men. “We went around the Guayaba and I had to be pushing them because the rhythm was stronger. Not to mention that the tactic you use in a female competition is difficult for me to model because we practiced it very little in Cuba. “

For a moment he stops to talk about the future. “The cycling that comes I see it lazy. It’s not like before. The quarry is loose. When you call an athlete, they tell you it’s a phenomenon and you evaluate her, you realize that preparation is decreasing “

He is also concerned about the world cycling landscape. “It has a great impact on us because the technological level in the world is very high and not only in bicycles, but in sports equipment in general. There are other technologies and training methods that show everything, even the hours you have to rest in correspondence with the physical loads, etc. The world is on the rise in that and we follow a tin behind ”.

Convinced that Arlenis still has to make history in this sport after his second appearance at the Olympic Games, “the Chinese” anticipates that it may be time for retirement to enjoy at home with his wife Naomi and his children. “I will make the decision in December and I hope they understand me. The goal has been high and I modestly believe that I have fulfilled with sport and with Cuba ”.