LIMA 2019 DELIVERED THE VELODROME TO THE PERUVIAN CYCLING FEDERATION 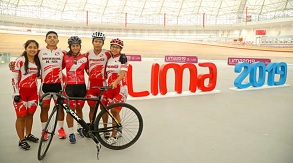 LIMA. The Pan American and Parapan American Games Lima 2019 are getting closer. For this reason, many of the facilities in which the sports festival has been delivered to the different Federations. This Monday was the turn of the Velodrome of the National Sports Village.

The Peruvian Cycling Federation received, on behalf of the organization of Lima 2019, this scenario, remodeled with the intention of complying with international standards and being one of the most modern in America.

The Executive Director of Lima 2019, Carlos Neuhaus Tudela, was in charge of making the delivery to the President of the Peruvian Cycling Federation, Gustavo Matus de la Parra, in the presence of the Project and Infrastructure Manager of Lima 2019, Wilhelm Funcke and several selected that will be in the international competition in this venue of the Videna.

“It has a roof that will allow competitions and training at all times of the year. For athletes this is a great legacy and for future generations, so they can take advantage of their conditions, “said Neuhaus.

The gratitude for the delivery was paid by Gustavo Matus de la Parra, president of the Peruvian Cycling Federation. The track is already approved by the International Cycling Union (UCI). Everything is in place and now we have to take care of this Velodrome, which is the world stage A1, as in Europe. Now we have the commitment to make world champions, “said Matus.

Finally, the selected Estefany Valdivia, Samantha Molina and Jeffrey Olivares, were in charge of highlighting the importance of this delivery. “It is a dream come true. Now Peru has a professional track. We will train harder and bring medals to Peru. We are proud to have this Velodrome, “they said.

The Velodrome is one of the venues remodeled by Lima 2019, at the VIDENA headquarters, to receive the Track Cycling competitions at the Pan American Games and Track Cycling at the Parapan Am Games.

The Velodrome has a track of 250 meters perimeter. The track is made of African wood and thanks to the remodeling that took place in this scenario, now it has a roof that makes it a closed stage.

This scenario has a capacity for 2,300 spectators in comfortable seats. The track width is seven meters. It has superelevations (elevation in curves) with 42 degrees of inclination. The Velodrome has dressing rooms and showers inside, a common area for competitors, an area for judges, a topic for athletes and spectators, a mixed zone for accredited journalists and an area for anti-doping control.

The Videna Velodrome is finished and ready for competitions thanks to the homologation it received from the International Cycling Union (UCI), which certified the stage to receive the competitions in Lima 2019.

The official UCI homologous, Randy Shafer of the United States, arrived in Peru to verify the modern facilities. Shafer homologated the track after verifying the conditions in which it is. With this, the Velodrome was enabled to be the headquarters of Track Cycling and Track Cycling, in the Pan American and Parapan Am Games, respectively. The homologous also reviewed the equipment of the competition track, such as the splitter, photo finish, count turns and time, which are part of this scenario.

In the Track Cycling competition, 95 athletes from all over the continent will participate. The contest of the Pan American Games will take place in this venue between the 1st and the 4th of August.

Peru would be represented by an average of 16 cyclists, between ladies and men. Among them Andrés Gonzales, who is training in Europe; as well as Royner Navarro and Alonso Gamero, who will participate in the mid-level tests on the track and also in the Road Cycling Competition, on the Costa Verde.

In the Pan American Games, the modalities of Speed, Keirin, Omnium, Team Speed, Team Persecution and Madison will be developed in the Track Cycling competition. The same tests will be carried out with the ladies.