LIMA 2019: THE AREQUIPAN CYCLIST WHO WANTS TO TRIUMPH IN THE PAN AMERICANS 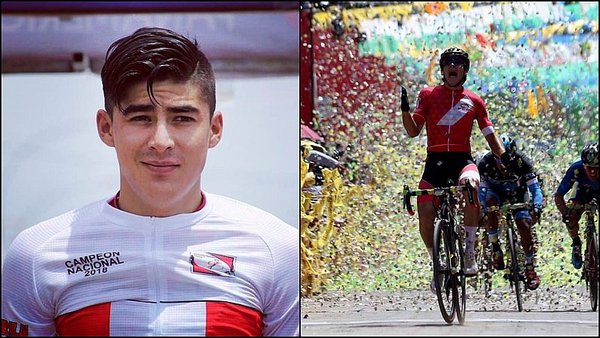 AREQUIPA, PERU. Pedaling for a dream Peruvian cycling assumes greater relevance and this has been the product of the great effort of young exponents such as Arequipa Alonso Gamero, who is the most outstanding representative of our country and now only thinks of getting the best way to the Pan American Games in Lima 2019 , although he is aware that the support is still not enough and therefore calls on the private company and the Peruvian Sports Institute to provide the Peruvian team with the necessary resources and, above all, the necessary competitions.

Gamero will be present at the Independent Tour of the Dominican Republic, which will take place from Monday 25 to March 3. He was invited by COPACI and Panam Sports to be part of the ‘South America Team’, which is made up of another prominent Peruvian, André Gonzáles, by the Paraguayan Victor Granje, the Bolivians Carlos Luswing and Javier Arando and the Ecuadorian Carlos Quishpe.

How do you take the fact that it is the strongest letter of Peruvian cycling for Lima 2019?

I do not consider myself the strongest because my teammates have also been training hard but maybe I do have a greater experience that helps me deal with some difficult situations.

Do you have everything ready for your preparation with a view to these Pan American Games?

The commitment exists on the part of the team but what is needed is the financial support since it is an expensive sport. The bicycle needs accessories or it is spent, and it needs to be renewed every so often. Now that I suffered a fall in the Vuelta a San Juan, luckily my bicycle was not broken but it was weakening, we do not have a spare part and that puts us at a disadvantage.

The other selections come with a lot of investment, a whole team of mechanics and tools, if we had that maybe we could improve our level.

Speaking a little about your beginnings, how did you get started in this sport of wheels?

Since I was a kid I always liked riding a bicycle, my mom did not like it because I fell. Later on I managed to convince her to buy me one and I opened the way because it was constant. I participated in the interschools that sometimes are not given importance because they consider the athletes ‘very young’ but that is precisely where the new values ​​come from and the biggest proof is that many of those who participated in those championships will now be present in Lima 2019 .

Do you notice a change regarding Peruvian cycling since you started so far?

When I started cycling it was stagnant. The changes have only recently been noticed 4 years ago, despite being slow, it was progressing and this year it has exploded as more people are competing and should continue like this, not stop again.

Why do you think cycling is not valued in our country?

There is not yet a cycling culture in Peru and we can see that even in the streets, but I think that with these actions of the national team and the small achievements we are generating greater interest in the public and greater awareness, now they know that bicycles are not only a means of transportation, but also a tool to practice sports and compete.

What characteristics do you think a good cyclist should have?

The mentality is important. You have to have your head set, know what you want because it is not a one day test, are several days and you have to have the mental strength to overcome adversity, whether falls or mechanical failures, one must know overcome it . To have a lot of temperament

Have you been able to see the incursion of new values ​​in this sport?

Honestly no. We do not have a generational change, and that worries me because we will have about 5 more years competing and I have seen very few young athletes who are willing to be professionals in this sport, the lack of support discourages them

Despite the problems, what is your commitment to Lima 2019?

Unfortunately we are in a country that does not value much sports that are not known but I think it is in each one to continue fighting for what he wants and at some point I have faith that the reward will come for all the effort that together with my colleagues we are doing for gain notoriety.

We want to show the IPD that cycling is working hard and that they value that to give us more support.

FACT: The road cycling for the Pan American Games will take place on the Costa Verde of San Miguel. The competition days will be Wednesday 7 and Sunday 11 August. (elbocon.pe)