Luis Carlos Chía, first leader of the Tour of Colombia 2022 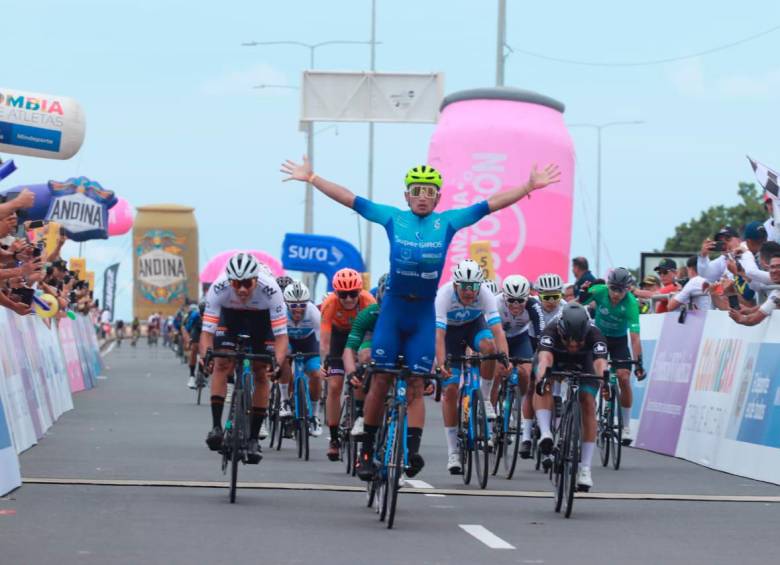 In a spectacular and closed ‘sprint’, Luis Carlos Chía (Supergiros Alcaldía de Manizales) won the first stage of the 72 Tour of Colombia 2022, after a 123.4-kilometre journey, which began in Barranquilla and ended in Cartagena with 176 competing cyclists.

The Bogota sprinter won the opening day of the Colombian round with a time of 2 hours, 50 minutes and 08 seconds. Behind, in second place came Juan Alejandro Umba (Team Boyacá Avanza) and third Jordan Parra (Team Petrolike).

Around 9 in the morning, the first stage of the 72nd edition of the most important cycling race in Colombia began. Names such as José Tito Hernández, champion in 2021 of the race, Oscar Sevilla, champion in 2013, 2014 and 2015, and Darwin Atapuma, a cyclist with more than 13 years of career, stood out in the peloton. After the start on the Malecón del Rio Magdalena in Barranquilla, 12 riders tried to form the escape, which did not prosper due to the peloton.

With 50 kilometers to go, a breakaway was consolidated with Steven Haro (Team Banco Guayaquil, Jesús Ignacio Prado (Canel’s Zerouno Mavic) and Camilo Castro (CM Team). This managed to have an advantage of more than a minute, however, at 23 kilometers, the peloton increased the pace and gradually neutralized the breakaways.

Three kilometers later the tension increased and the first fall occurred where three cyclists hit the ground and some were forced to leave the road towards the green zone to avoid being in the middle of the Montonera.

Already on the arrival straight to Cartagena, Luis Carlos Chía took advantage of a tangle behind him that upset the packing trains to get his maximum power and cross the finish line in first place, with his arms raised and to the surprise of many sprinters.

“I prepared very hard and this is a dream come true. Save me for last, the last kilometers were very fast. Very grateful to my teammates”, said the runner from the capital Luis Carlos Chía, to the Win Sports Channel, after finishing the stage.

The second stage of the Colombian round will take place this Saturday over 176.7 kilometers between Cartagena and Sincelejo with a fourth category mountain prize. A flat day, which will see another duel of sprinters. In total there will be 10 days of competition until June 12 with a total distance of 1,427 kilometers.