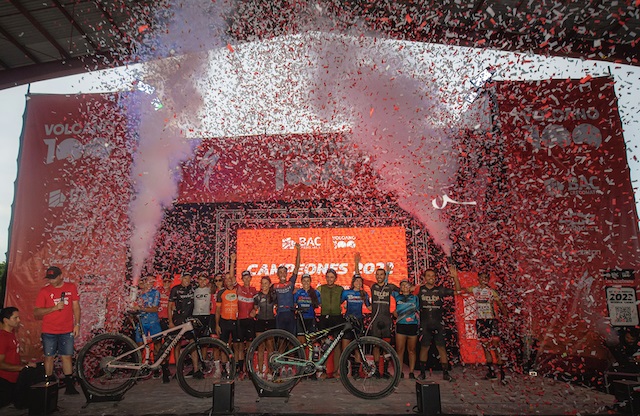 The seventh edition of the Volcano 100 crowned the Honduran cyclist Luis López and the Costa Rican Milagro Mena in the 100 miles of the most anticipated race of the year, the Volcano 100, held in Liberia, Guanacaste. On this occasion, not only was the Rincón de la Vieja Volcano skirted, but the beautiful views of the Miravalles Volcano were also enjoyed.

The male elite category kept riders Luis López from Ópticas Deluxe, Luis Mejía from CBZ-7C-Economy and Paolo Montoya from Innova Bikes in the top positions throughout the 100 miles, leaving the rest of the lot behind with a difference greater than 10 minutes.

An attack by the Honduran cyclist in the last 5 kilometers gave him the advantage and he was crowned champion by stopping the clock at 06:02:43, while Mejía finished with 6:03:27 and Montoya was third with 06:05:35.

“The race was too hard, even in the last 5 kilometers was where I was able to take advantage, I was in a constant rivalry with Luis Mejía and Paolo Montoya, I decided to push harder and that was where I managed to take advantage. We come with a very good preparation for what is coming for my team”, said the Honduran runner Luis López.

In the women’s category, the cyclist Milagro Mena celebrates her return to Costa Rica after three months racing in Italy with the Sevetto-Makhymo-Beltrami team, with an important victory, showing that she has a good race pace.

“Mila” won her with a time of 7:03:26, taking a wide advantage of 25 minutes over second place Adriana Rojas (7:28:22), the podium was completed by Alejandra González Quesada.

“Very happy with the result, I came to enjoy this, I hadn’t ridden a mountain bike for three months. The first few kilometers were very intense, I always tried to go in the elite group as far as they gave me the strength, I managed to go out with them Cambalache and then I began to lose strength to be able to regulate myself in a better way. I felt very demanding, it was a very hard race, it rained almost all the way”, confessed Milagro Mena, winner of the elite category.

The 100 km open category was dominated by Team Colono – Bikestation with Diana Solano in the women’s category and Gael Sancho in the men’s category. The winners of the 50 km were Carlos Andrés Rojas and Evelyn Rojas.

One of the objectives of the organization of Volcano 100 for this edition was to become the first mountain biking race to obtain the award of the ecological blue flag, finally this Saturday in the Chamber of Cattlemen of Liberia the flag was raised that rewards the organization and the cyclists for the great efforts made to make this event friendly to nature.

“This is an event that we started working on a month ago, with training and all the parameters of waste, sanitation, among others. This is the first time that a mountain biking race has obtained this award and we are excited that year after year more events are committed to the environment”, said Flora Acuña, Coordinator of the Educational Centers, Special Events and Sustainable Homes Category of the Blue Flag. Ecological.