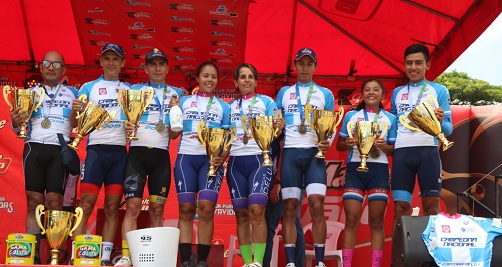 GUATEMALA. This Sunday the 2019 National Individual Time Trial Championship was held, with the victory of Manuel Rodas from the Decorabaños team, who won his ninth title and the eighth in a row, with an exact 43 minutes for the 38.5 kilometers, from Super 24, Escuintla to Super 24, Puerto Quetzal.

Manuel Rodas was the last cyclist to take the exit ramp and after 10 kilometers he reached his rival, Alder Torres defeating him definitively in the course, later he managed to surpass with 1 minute and 32 seconds Bryan Ríos of the Quiché Association his more dangerous pursuer.

Meanwhile in the women’s category, 20.8 were disputed, with an intense fight between the legionnaires, Gabriela Soto and Paula Guillen, the victory was for Guillén with only 12 seconds of advantage over Soto, conquering his first national championship in the Individual Time Trial he was looking for from 4 years ago. (Nery Ajsivinac / Press F.G.C)