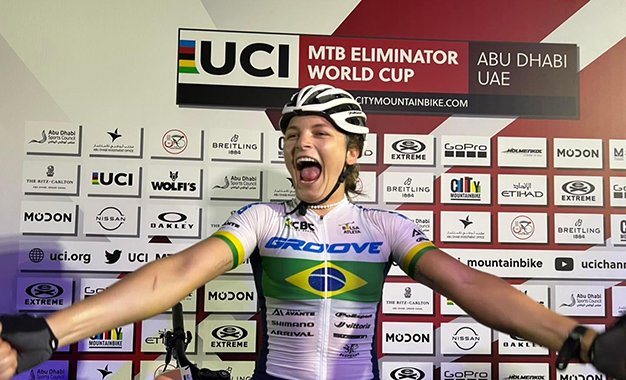 Marcela Lima (Groove Bikes), two-time Brazilian MTB XCO champion in the Under 23 category, started 2022 with a victory in the inaugural stage of the UCI MTB Eliminator World Cup 2022. In the men’s competition, French champion Titouan Perrin-Ganier was the winner. The stage was held in Abu Dhabi this Saturday (April 23) at a circuit on Al Hudayriyat Island.

“It was so good. I came to Abu Dhabi with one goal: to win. I still can’t believe I actually made it. I’m happy with life. I dedicate this victory to my family and friends in Brazil, as it would not have been possible without their continued support. The race track was quite impressive,” said Marcela Lima.

The Brazilian got the second best time in the qualifying time trial, 1.04 seconds behind the Italian Gaia Tormena, current world champion of the modality, and remained firm in the competition. In the quarterfinals she surpassed the French Margaux Borrelly and the German Nina Reichenbach and, in the semifinals heat, she was again in second place and won a spot in the final. Gaia Tormena fell in the last contest and finished in fourth place, behind the Dutch Didi de Vries and the German Marion Fromberger. The competition brought together athletes from 15 countries.

This was Marcela Lima’s second victory in the World Cup, after winning the Congonhas (MG) stage in 2018 (recall here). The Brazilian is the first leader of the general classification, with 80 points. Gaia Tormena is second, with 55 points, and Didi de Vries is third, with 52 points.

In the men’s, Frenchman Titouan Perrin-Ganier beat Mexican Daniel Castillo Noyola and Frenchman Killian Demangeon in the final contest. Defending world champion Simon Gegenheimer was fifth. “The heats were very tough, we had a close battle, luckily I was able to find a gap and walk full steam towards the finish line to win alone. It was great to have competed at such an amazing venue in Abu Dhabi with such an amazing crowd and I can’t wait to defend my leader’s jersey for the next race in Leuven,” he said.

The next stage of the UCI Mountain Bike Eliminator World Cup will be held on Sunday, June 5 at Ladeuzeplein in Leuven, Belgium.