MARCOS RODRÍGUEZ SURPRISED AT THE VILLICUM ON THE 2nd DATE IN SAN JUAN, ARGENTINA 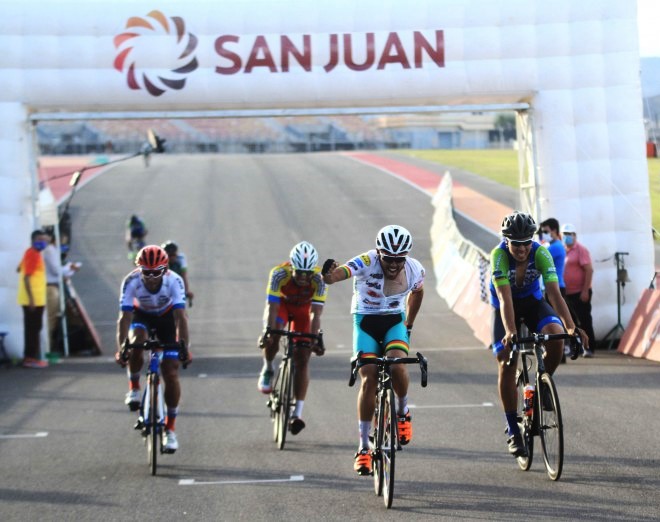 This Sunday the San Juan Villicum Circuit was the sporting epicenter of the second date of the cycling season in the province of San Juan, Argentina, which once again had a successful organization. Under a radiant sun that added a very special seasoning to the competition, the triumphant glory remained for Marcos León Rodríguez. The pedal rider that is part of the Construcciones Ureña team became strong at the finish line when the Municipality of Rawson and Puertas de Cuyo threatened to take away the victory.

With 157 souls on the track and a great expectation among the teams and the amateur public (who followed the news through official television and the different media present), today the season was continued local cycling route. From the previous one you could see the good expectations that reigned in the environment. This was due, on the one hand, to the fact that this race paid homage to the Calingasta Double Classic (somehow all the runners wanted to witness it); and, on the other hand, that local teams appeared among those registered as well as from neighboring provinces, such as Mendoza, La Rioja and Córdoba.

The continental cast of Agrupación Virgen de Fátima arrived with the badge of having obtained the victory on the opening date. Daniel Juárez, cyclist and lawyer by profession, a native of Las Breñas, province of Chaco, was the one who on November 8 had claimed victory. On paper he was the man to beat, but the final sprint gave us another sequence.

But, let us start at the beginning. Moments after 4:30 p.m. (agreed time for the start) and Luis Suárez, president of the cycling subcommittee of the Juan Bautista Del Bono Club, organizing entity of the event together with the Sanjuanina Cycling Federation (FCS) and the Sports Secretariat, the green flag lowered. It meant the starting point for the sporting contest that had as fundamental ingredients the high ambient temperature (and during the circuit), the characteristics of the track and the ten candidates present for a potential victory.

The beginning of this part of the championship was different from its predecessor. In this, all the “carbon horses” started desperate to be ahead. Many took a toll on their legs and they abruptly left. Today the situation was different. The riders had taken note of the mistake and this time they started calmer. They regulated their physical performance.

Third lap and the first race dropouts. The heat was beginning to play its part. Almost no competitor dared to try to escape (Fabio Figueroa -second lap- and Rubén Brenta -fourth lap- were leaders for a few seconds and the group caught up with them instantly) and risk falling behind everyone in a short time. The first emotion would come on the fifth lap with the first special pass. Jonathan Soria, who is known for having won several of those previously, finished first. Very close and behind Santiago Rodríguez passed.

Between turns 5 and 10 there were more news. The group continued to dominate, but in the eighth there were five runners who were encouraged to try something new. His reward was ten seconds apart from those who came further back and they immediately surrendered. All action on the track was pure strategy. Everyone took care of their physical rest, they saved themselves for last.

We were approaching the middle of the event and on the second special pass (turn 10), a piquetero from Fatima took the applause. Nicolás Naranjo, one of the representatives on the track that the Rivadavian town of La Bebida has. Juan Pablo Dotti, from SEP San Juan, another of the local continental teams that debuted this season, seconded his colleague. Before continuing, this lap had completed the first hour of the race.

From turn 11 onwards there was a group of 15 cyclists who began to “cut themselves off” from the rest. Little by little they would dominate the reins of the race. Meanwhile, the group looked at them 23 seconds apart. They were Videla, Lucero, Ibarra, N. Tivani, Escuela, Juárez, Velardez, Rosas, Dotti, L. Rodríguez, M. Rodríguez (brand new winner), Álvarez, Cobarrubia, Traico and Bravo.

By the third thrill of the afternoon (lap 15), the most regular of the race began to show a little more. In fact, it was Leonardo Rodríguez and Agustín Videla who were left with the one-two after the bell.

The end was approaching, but there was still the last special pass. At the time of the twentieth lap, Daniel Juárez and Higinio ‘Paco’ Lucero were left with the first two places respectively. By this time there were already many dropouts.

Under a beautiful sunset, in which the wonderful sports complex, its mountains and the San Juan sun were mixed, one longed for the end of the race. And after 102.3 kilometers traveled in 2 hours, 24 minutes, 14 seconds, the one who passed the finish line first was Marcos León Rodríguez. Bump for the Ureña team, which a few seasons ago joined the road calendar that the FCS controls.

Meritorious recognition for Leonardo Rodríguez (Municipality of Rawson) and Emiliano Ibarra (Puertas de Cuyo) who contributed their own so that the last levers are vibrant. They completed the podium.

Regarding the third date, the confirmation of the day and sports scenario will be communicated in the next few days.