Mardoqueo Vásquez, champion of the 61 Tour of Guatemala 2022 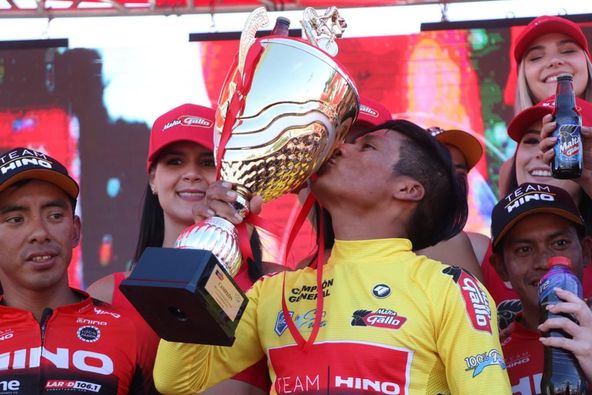 The historic performance of Mardoqueo Vásquez two years ago in the Tour of Guatemala in 2020 was repeated this Tuesday and he wrote another golden chapter by consecrating himself champion of the 61st edition of the most important cycling event in the country.

Mardoqueo Vásquez was the best rider throughout the ten stages of the 61st edition, which covered 18 departments and covered 1,290 kilometers, the most demanding in history.

The one from Totonicapán also won two stages, the fourth and the sixth of the competition that began on October 23. “I want to thank God for giving me the opportunity to win one more Vuelta, and my teammates for their great work during this stage where we kept the lead” were Mordoqueo’s first words.

“For me it is something that I cannot fully express, I am very happy to be the winner of the Vuelta a Guatemala twice and consecutively, the first Guatemalan to achieve it” he continued.

“Súper Mardo”, became the first Guatemalan to successfully defend his title, thanks to his exhibition and the great work done with his team Hino-One-La Red. The second best of the Vuelta a Guatemala 2022 was the Colombian Wilmar Pérez and Jimmy Montenegro from Ecuador was third.

Dorian Monterroso for his part, was the winner who left the tenth stage, arriving first at the finish line in 2 hours 24 minutes and 1 second. He was accompanied on the podium by the Mexican José Muñiz and Henry Sam from Decorabaños of the Quetzaltenango Association, the riders arrived 10 and 11 seconds after Monterroso respectively.

In a surprise finish, Dorian Monterroso (Decorabaños-ASO Quetzaltenango) took victory in the last stage of the Vuelta a Guatemala 2022, held on a circuit at Gallo Finca el Zapote, over a 110-kilometer route on undulating terrain. Guatemalan Mardoqueo Vásquez, from Hino-One-La Red-Tigo-Suzuki, the great champion.

In the ninth section, the local rider surprised his fellow escapees and after an attack in the final kilometers he achieved victory ahead of Mexican José Muñiz (Mexican National Team) and his compatriot Henry Sam (Decorabaños-ASO Quetzaltenango).

After being suspended for a year due to the Covid-19 pandemic, the Tour of Guatemala made its return to the country’s roads and left Guatemalan Mardoqueo Vásquez as the winner.