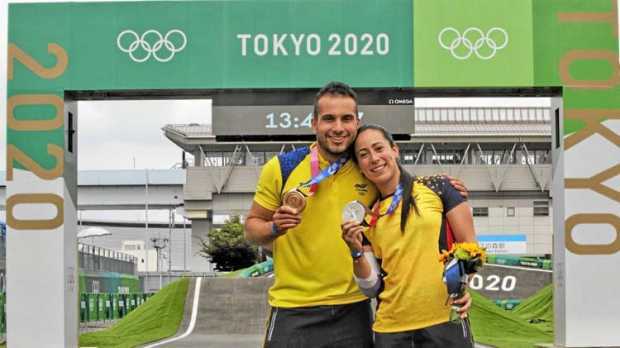 Olympic medalists Mariana Pajón and Carlos Alberto Ramírez lead the Colombian team to the UCI BMX Racing World Cups, which will take place between September 24 and 25, and between October 1 and 2, respectively, on the Carlos Ramírez track of the El Salitre Recreational Sports Park in Bogotá.

The coach of the Colombian Andean BMX Team, Germán Medina, summoned a group of 12 athletes to form the national team in the four stops that will close the UCI World Cup season, after the rounds held in Glasgow (1-2) and Papendal (3-4).

Mariana Pajón, from Antioquia, has just been crowned Pan American and South American champion in Santiago del Estero, and will be accompanied in the women’s elite category by Gabriela Bollé, from Barranquilla, who also achieved second place in the South American held in Argentina, precisely behind Pajón.

In the men’s elite category, the double Olympic medalist Carlos Alberto Ramírez, who missed the last World Cup due to injury and finished third in the fourth round of the UCI World Cups, in Papendal, will be returning to the competitions on the track that bears his name. Netherlands.

For their part, in the U-23 category, the national champions of the category were summoned: Valentina Muñoz and Samuel Zapata Giraldo; the junior national champions: Sharid Fayad and Juan Pablo Chaparro, and the bicycle cyclists Isabela Carranza and Santiago Santa, who placed sixth and seventh, respectively, in their recent participation in the last World Championship.

It should be noted that the Bogotá rounds will deliver the first points in the UCI World Cups for the BMX Olympic ranking for the next Olympic Games in Paris 2024.