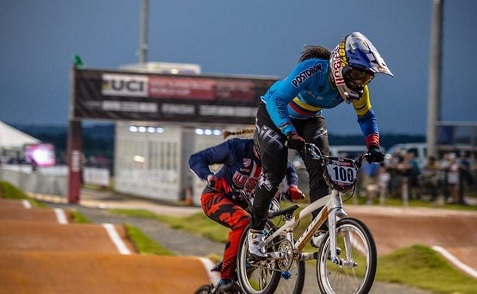 BOGOTÁ. In Santiago del Estero, Argentina, the tenth and final round of the BMX World Cup was held this Sunday, which was attended by Colombian athletes.

Mariana Pajón, was competing in the elite ladies category, and advanced to the semifinal of the contest, as a fall prevented the two-time Olympic champion from fighting for the final quota.

However, it was known that the Antioqueña fortunately does not present serious injuries, according to her brother through Twitter: «Mariana is fine! Just bumps and scratches fortunately, no injury despite the strong blow! It has already been reviewed with RX in Argentina and they are healing the wounds that will be other battle marks! The road to # Tokyo2020 continues! Thank you for the concern and the good energy! »

On the other hand, another of the coffee competitors in the fight for the competition podium, was Carlos Ramírez, who also fulfilled a great role and advanced to the men’s elite semifinal.

While Andrea Escobar in ladies, Miguel Calixto, Vincent Pelluard and Juan Felipe Ruiz in boys, advanced to the round of 16. Another coffee competitor who was in action was Juan Camilo Ramírez. (Fedeciclismo Colombia).