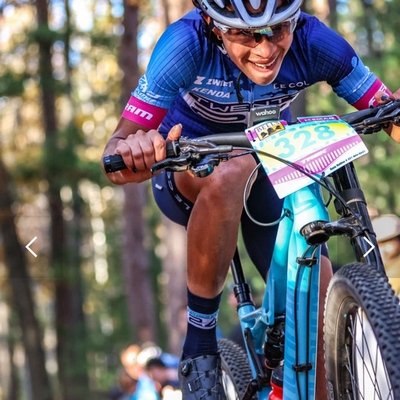 Cuban Marlies Mejías announced that she will race in the Escambray Mountain Bike Challenger scheduled for 21-23 this month in the imposing scenery of those mountainous areas of the Sancti Spíritus province.

“I am flattered by the invitation of the Los Manigüeros group and although I am not in my best sports form, I want to support the beautiful idea and the effort they are making to promote this modality in my country”, said the “all-terrain” of the national team of cycling.

Marlies, who turned 29 years old last December, returned to the sport in August 2021 after almost three without competing as she was enjoying another highly desired stage of her life, that of mother.

Her debut took place in Santo Domingo, Dominican Republic, in August of last year during the Pan-American Road Cycling Championship with victory in the 20-kilometer individual time trial of the elite women’s category.

In that same neighboring country, she participated in a mountain bike race and won the highest awards among the female contestants.

Then last November she secured an outstanding ninth seat in Michigan, United States, where outstanding world-class contestants competed in a demanding 75 km stretch.

After a break at the end of the year, the Queen of the Central Caribbean Games of Veracruz 2014 restarted her preparation to face this cycle in which she has just pretensions to return to stellar planes and attend Paris 2024, which would represent the third Olympic games of her.

The girl from Güira de Melena was eighth in the London 2012 event and seventh in Rio de Janeiro 2016 in the multiple track test called omnium.

The “all-terrain” of Cuban cycling exhibits medals in the oval and on the route of Pan American Games, continental championships and world cups.

A combative cheerleader for stage races, she was a member of the Weber Shimano clubs of Argentina in the 2016-2017 season and the Twenty20 of the United States in 2017, a team of the world elite category UCI Women’s Team.

“But I also love mountain biking, so I intend to ride the three stages of the Challenger Escambray and do my best,” she said.

Marlies is not a stranger in the mountains. In 2017 she was the brand new women’s champion in the International Titan Tropic raced through the hillside of the northern area of ​​Pinar del Río, where she was even placed ahead of a good number of men.

The “all-terrain” of Cuban women’s cycling exhibits in her chest medals on track and road in the Pan American Games.

The Challenger Escambray organized by Los Manigüeros has the backing of the Sancti Spíritus provincial sports department, its cycling commission, and the companies of Campismo Popular and Gaviota S. A. in that territory.

The first stage on January 21 will have 35 km; On the 22nd the longest and most difficult day will be run over 70 km and on the 23rd it will conclude with the 30 km stretch from Topes de Collantes to Playa Ancón.