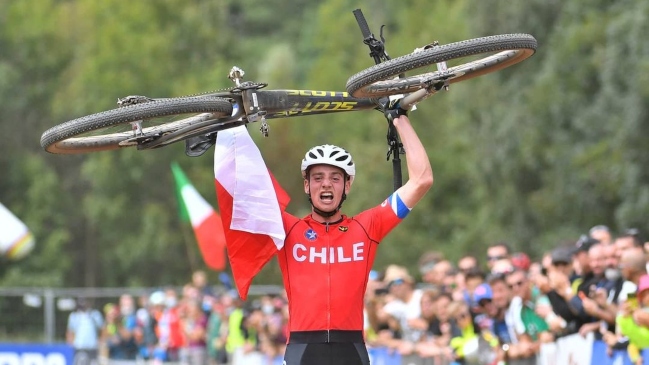 Historic, spectacular … This Saturday, the Chilean Martín Vidaurre became the Under 23 mountain bike world champion, an unprecedented milestone for the national sport, during the universal fight held in Val di Sole, Italy.

The cyclist won the race, with just over a minute behind the second, the local Juri Zanotti (1:03 minutes) and a little more difference to the Swiss Joel Roth (1:38), third on the podium. All are already known in the international competitions of this modality.

It was a tremendous surprise that this Creole athlete gave, because he was not the great favorite to take the test. Vidaurre stayed the whole race in the first position and managed to hold on to the finish line and take the glory.

“This year we will be world champions,” said Martín Vidaurre in March, after comfortably winning the Pan American Mountain Bike held in Puerto Rico. And that announcement was fulfilled on August 28, 2021.

Vidaurre, who is 21 years old and competes in the U-23 category, was from start to finish at the forefront among the 97 competitors seeking a place on the podium, increasingly expanding his lead at the top and finishing first. place more than a minute from his closest pursuer, the Italian Juri Zanotti.

“I am very happy with the victory. It was given to me from the beginning, I was a good tactician waiting for the opportunity. I did my career at my own pace, I gave him everything, with my heart and for Chile, and he came out. Happy with all the work ”, commented the athlete after the competition.

With this title, Martín Vidaurre becomes the first Chilean in history to be world champion in a Mountain Bike competition. With multiple South American and Pan American titles at the youth level, Vidaurre was also a bronze medalist at the Lima 2019 Pan American Games and finished 16th at the recent Tokyo Olympics.