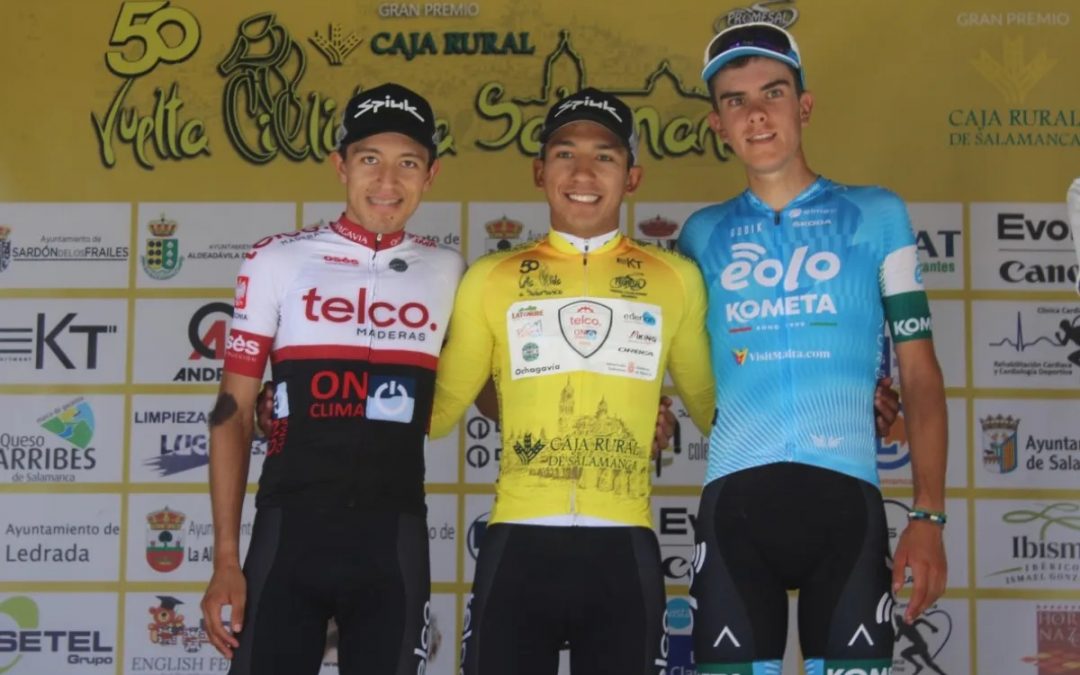 The Mexican Edgar Cadena (Telco´m-ON Clima-Osès) established himself as the great champion of the 50 Vuelta a Salamanca this weekend, in whose last stage the Uruguayan Antonio Thomas Silva (Previley-Maglia-Coforma-Bembibre won ), disputed between Doñinos and Salamanca over a distance of 142 kilometers.

Edgar Cadena was “happy and content to be able to take home the General Leader Jersey. He thanked his team for the great work they have done to bring home this victory, “without a doubt it is the result of a great job on the part of of all the boys and the staff, that without them we would not have been able to achieve this result”, he pointed out.

“Today was undoubtedly a fast and nervous stage, attacks were the order of the day. But we knew how to control everything and in the end we saved ourselves to get to enjoy the triumph. I also thank all the sponsors, without whom this would not be possible. We will continue to prepare for the last races of the season,” he concluded.

The last stage of the race went without incident until entering the last 25 kilometers. Everything was ready for the resolution of the sprint on the steep Calle San Pablo, and there, Thomas Silva raised his arms, sealing his idyll with the Vuelta, since last year he also won on the first day of the round. At the wheel of the Uruguayan entered two Eolo-Kometa, Javier Serrano and Manuel Oioli.

A few meters behind, Edgar Cadena also celebrated his arrival, as the overall winner of this edition, repeating the image of the podium, located next to the Plaza Mayor, with two Telco’m-ON Clima-Osès occupying the first two positions (the Colombian Eli Saúl Burgos was second), and the Spanish Fernando Tercero (Eolo-Kometa U23) was third.

That last awards ceremony had the outstanding presence of José Roque, deputy from Salamanca, Enrique Moronta, head of Caja Rural Salamanca, and Francisco Javier García, sports councilor of the Salamanca City Council, accompanied by the historic cyclists Agustín Tamames and Laudelino Cubino , and Oche Alonso, head of Promesal, organizer of the Vuelta a Salamanca.

In this scenario, the one who was going to accumulate the most photographs was going to be the Mexican Edgar Cadena, adding the brand new yellow jersey from Caja Rural Salamanca, the clothing of the leader of the mountain from Evolk-Canon, the regularity of Mirat Fertilizers, the combination of Ekipart and the general sub-23 with the sponsorship of the Municipality of Sardón de los Frailes.

The flying goals of MCI Quercus and the special sprints of Nissan-Anferpa Cars, changed hands on this last day, being for Alejandro Gomiz (Froiz Supermarkets) and Joan Riera, respectively, while the combativeness of the day, in charge of Embutidos Ibisma , it was also for the latter.

The jersey for the best Salamancan, thanks to the Salamanca City Council, went to Daniel Martín (Telco´mON Clima-Osès), and the one for the best Castilian and Leonese, with the collaboration of the Salamanca Provincial Council, finally went to Fernando Santos from Avila (Notary).