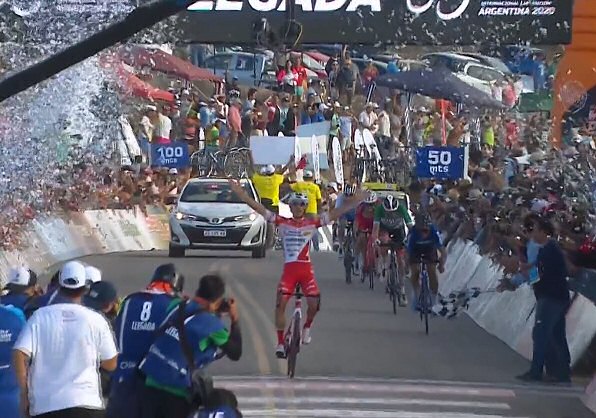 The Colombian Miguel Flórez, of the Italian team Androni-Giocatoli, won on Friday the fifth stage of the Tour of San Juan, a 175-kilometer route rising between the towns of Caucete and Alto Colorado.

Meanwhile, Belgian Remco Evenepoel continues to lead the overall standings and is emerging to win the title.

The 23-year-old Bogota-born Flórez managed to take off in the last 200 meters of a strong vanguard squad, at a very demanding stage from 600 meters high in Caucete until 2,624 of the arrival in Altos del Colorado.

In the ‘queen’ stage of the Tour, several of the prominent riders tried to escape alone, among them Evenepoel, the Italian Filipo Ganna, the American Brandon McNulty and Guillaume Martin, but they were finally reached by the vanguard group.

In the sprint, Flórez beat the Spaniard Óscar Sevilla and Brandon McNulty, who completed the podium, while Martin and Evenepoel finished in fourth and fifth place, after a stage that left the Belgian headed for the final victory in the absence of two stages So that the turn ends.

“I am very happy for my team, for having worked very well for this competition and for things to happen. I saw that I had many legs at the beginning of the climb, I was calm and that was the key, I waited until the end and I escaped” said Flórez, who won one of the best victories of his career.

With this triumph, the Bogota climbed to the fifth step of the general, while McNulty ascended to fourth place and Guillaume Martin is in seventh position.

On Saturday the sixth and penultimate stage will be celebrated, with a journey of 155 kilometers in descent and ascent, with departure and arrival at the San Juan-Villicum circuit.