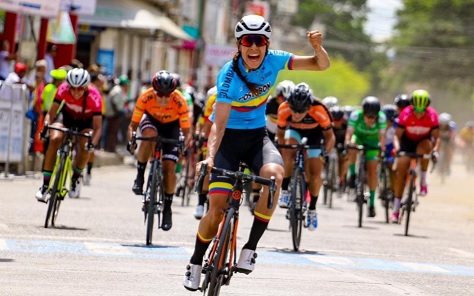 BOGOTÁ. If something was missing Milena Salcedo was to debut with victory in a Tour of Colombia Women. The Bogota team of the Colombia Manzana Postobon National Team had been close at the close of the third edition when it was overtaken by the Venezuelan Lilibeth Chacón, in the Sogamoso circuit. However, this Tuesday, at the opening of the most important race in the country for the women’s category, the capital took a blow of authority in Zarzal to sing victory and be the first leader of the fourth edition.

Salcedo, champion of the special sprints in 2018, prevailed in the fraction of 126.4 kilometers that began in Manizales, with a time of three hours, 25 minutes and 53 seconds, surpassing with solvency to the Paran Latriglia (CM Benros) casanareña and the Cundinamarquesa Paula Carrasco (Fundación Proyecta), who continues to demonstrate that she is one of the new faces of the sprint in the women’s category.

The day was of contrasts for the members of the Colombia Manzana Postobon team, who celebrated with the victory of Milena, but suffered the loss of Liliana Moreno, affected by a virus that forced her to close the season and resign one of the objectives that were He had traced to complete a year of great results and progression with the Astana Women Team.

In this way, the national coach Carlos Mario Jaramillo can only have three cyclists: Milena Salcedo, the debut in selected Yolanda Valderrama and the three-time champion Ana Cristina Sanabria, who will now officiate as the sole leader for the general classification.

This Wednesday, the most important women’s lot in the country will arrive in the picturesque municipality of Salento, in the department of Quindío, after traveling 113 kilometers that will open their way in Zarzal (Valle). (Fedeciclismo Colombia)