MOLANO CELEBRATES IN DUITAMA AND CAICEDO MAINTAINS THE LEADERSHIP 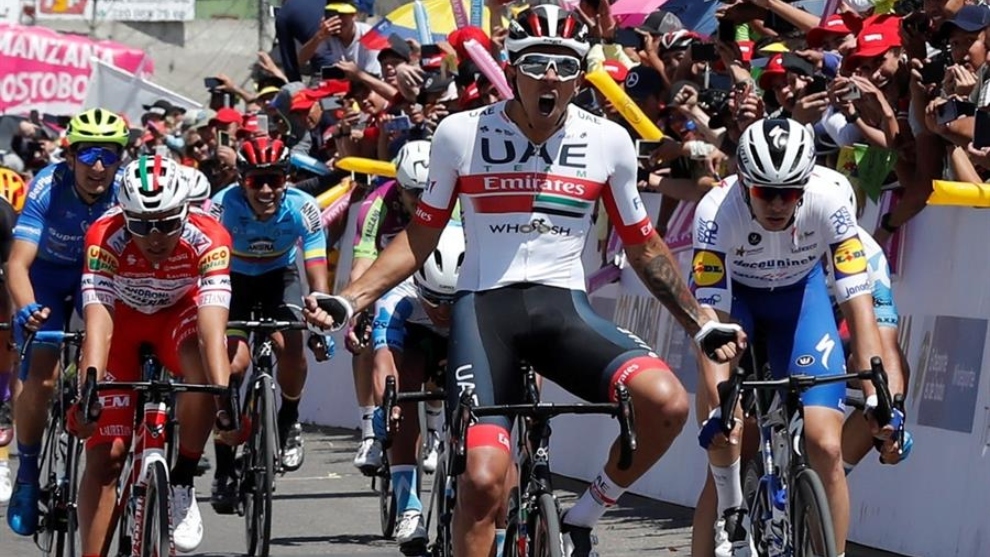 Juan Sebastián Molano (UAE Team Emirates) was left with the victory in the second stage of Tour Colombia 2.1. The Boyacense sprinter, true to his style, won the decisive packaging with authority and in this way he won his first victory in the 2020 edition of the coffee race.

This Wednesday was a quick day and once again through the intense heat. The boyacense who is running at home, invested a time of 3 hours, 12 minutes and 09 seconds to win the duel of Álvaro Hodeg (Deceuninck-Quick Step) in Duitama after traveling 152.4 km.

The packers were summoned in Paipa (land of Molano) to sign their first chapter of this book of the national round; and yes, they honored the boyacenses who arrived in crowds at the finish line.

The escape of the day was not long in coming and once the initial flag was given, an escape formed by 10 runners was formed: Martin Urianstad (One X), Leandro Velardez (A. Virgin of Fatima), Matthieu Jeannes (Team Illuminate), Brayan Sánchez (Team Medellin), Aldemar Reyes (EPM Scott), Edison Muñoz (Pride Paisa), Vinicius Rangel (Brazil), Jorge Montenegro (Selection of Ecuador), Byron Guamá (Selection of Ecuador) and Anderson Paredes (Selection of Venezuela).

The escapists of the fraction that later were nine (Anderson Paredes of the Selection of Venezuela could not follow the step) managed to have a difference close to four minutes and that put them to dream about the feat. A feat that a few tried and that ended four kilometers away from the sentence due to the strong actions of the men of the Deceuninck-Quick Step and the UAE Team Emirates.

From the escape, rescue the steps of the special sprints of Brayan Sánchez (Team Medellín), who climbed the podium of the best to claim the shirt that accredits him as the leader of that specialty.

In the general individual classification, things did not change much in their scenery. The Ecuadorian Jonathan Caicedo continues to lead the Tour, ratifying the words of Juan Manuel Gárate (Sports Director of the EF) that puts him as a favorite for the final victory at the Verjón.

This Thursday, February 13, the third fraction of Tour Colombia 2.1 will be played. A new online stage of 183.3 km (the longest of the race), with departure in Paipa and goal in Sogamoso. Another opportunity for the sprinters to look for the chance of victory and where the mountain will make a small hint with the High Moral (fourth category).