Montenegro climbed on a mountainous day, Chalapud remains the leader in Ecuador 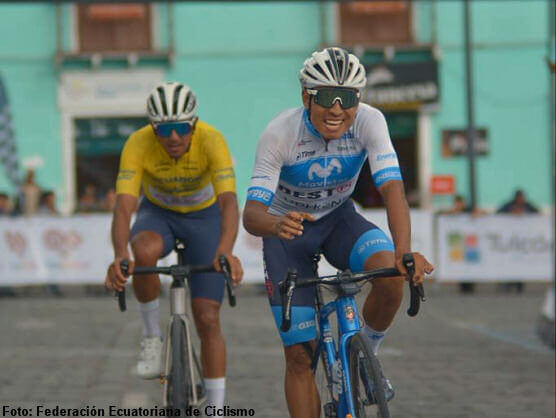 In another finale going up, the Ecuadorian Santiago Montenegro (Movistar-Best PC) won the fourth stage of the Tour of Ecuador 2022, a mountainous 153.4-kilometer journey that began in Otavalo and ended in San Gabriel. The Colombian Robinson Chalapud (Team Banco Guayaquil) maintained the lead without setbacks.

The champion of the 2020 edition entered escorted by the Nariño beetle, leader of the event, who has been completing an extraordinary career. In third position came his compatriot Wilson Steven Haro (Team Banco Guayaquil) a few seconds behind the winner.

The adventure of the day was made up of six riders: Alexis Narváez (Team Pichincha), Juan Diego Hoyos (Corratec América), Pablo Caicedo (Movistar Best PC), Elvis Cotacachi (Team Narváez), David Villareal and Andrés Irua (C&S), who they managed to have an advantage of close to 4 minutes with respect to a squad controlled by Team Medellín and Banco Guayaquil.

Once the ascent to Mirado del Cóndor began, the escape disintegrated, leaving only Andrés Irua at the head of the race, while his companions were gradually neutralized by an increasingly smaller group. The forces reached him to take the mountain prize, but he was finally captured on the ascent to San Isidro.

Santiago Montenegro crossed the last pass escorted by Wilson Haro, and a little behind the group of favorites with approximately 20 riders. Already in the final stretch, Paulo Pantoja would try to leave alone without success.

Finally, the group remained compact until the finish line where Santiago Montenegro won the duel against Robinson Chalapud, Steven Haro and Cristhian Montoya, who completed the leading quartet of the stage and bonuses to widen their differences in the general classification.

This Wednesday the fifth stage of the Ecuadorian round will be held, between Tufiño and Tulcan, on a 117.4-kilometer route riddled with mountains. The successor to Ecuadorian Wilson Steven Haro, last year’s champion, will be announced next Saturday at the Middle of the World.