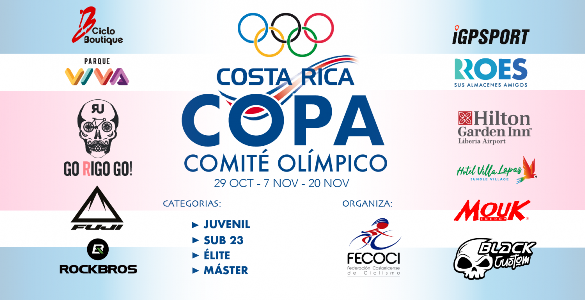 Tuesday, October 27, 2020. With the participation of 400 cyclists from 11 categories between men and women, this Thursday, October 29, the first of three dates of the National Olympic Committee Cup will be held at the facilities of Parque Viva.

The Cup, organized by the Costa Rican Cycling Federation (FECOCI), will have its second and third dates on November 7 and 20, in the same town located in the Guácima district in Alajuela.

“This Thursday the competitions will start at 7:00 a.m. As the tests and their awards finish, cyclists must leave the Park to make room for the other categories, this in order to carry out an adequate and strict compliance with the rules and protocols approved by the Ministry of Health “, mentioned Michael Picado , Director of the race and member of the FECOCI.

All competitors must arrive at the Viva Park parking lot already in uniform, they will have a space for their respective warm-ups, always keeping the distance protocols.

“It is worth mentioning that minors can arrive at Parque Viva accompanied by an adult. No one will be able to be in the stands or the circuit as a spectator, ”said Picado.

The National Olympic Committee Cup will have the attention of the national route selectors Yurandir Leandro and Javier Bonilla, who will pay close attention to the development of each of the pre-selected cyclists to define who will be representing the country at the end of November in the Central American Route that It will take place in Chiriquí, Panama.

Some of the Elite cyclists who have already confirmed their participation in the National Olympic Committee Cup are: Milagro Mena, María José Vargas, Jennifer Morales and in male, Daniel Bonilla, Elías Vega, Daniel Jara and Bryan Salas.