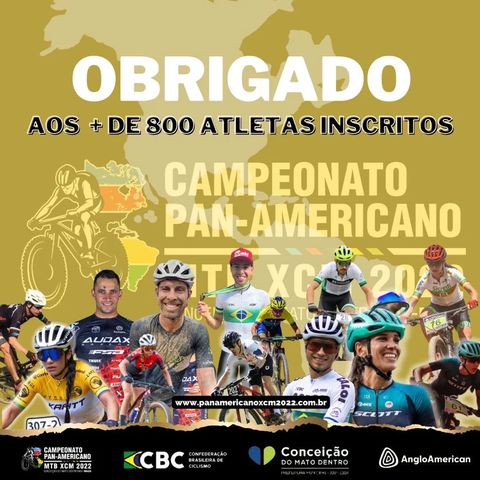 The Organizing Committee of the Pan American Mountain Bike Marathon Championship (XCM), thanked this group in a statement that more than 800 athletes from different countries are already registered for the event, which will take place on the 10th and 11th of September, in the city of Conceicao do Mato Dentro, in Minas Gerais, Brazil.

Held for the first time in Brazilian territory, the competition distributes points for the world ranking in the Elite category. The official categories are listed with the Masters A, B1, B2, C1, C2 and D, which are valid for Pan-American titles.

The fans will also have space and will compete on Saturday, during the Panamerican Cup, using the same route that professional athletes take.

According to the president of the Brazilian Cycling Confederation (CBC), José Luiz Vasconcellos, the city of Conceicao do Mato Dentro has all the necessary characteristics for a great Mountain Bike event of this magnitude and with so much expectation.

“We can decide that we will be holding a continental championship of the highest level, within an excellent structure and with all the characteristics of the natural and technical beauty that the city of Conceicao do Mato Dentro offers. soon it will be a reference in this segment, being recognized today as the capital of Mountain Bike”, highlighted Vasconcellos.

The last Pan American Mountain Bike championships held in Brazil were in the Cross Country Olympic (XCO) modality, held in 2014, in the city of Juiz de Fora (MG), and MTB Downhill, in 2021, in the city of Sapiranga (RS ). ).

Considered the ecotourism capital of Minas Gerais, the city of Conceicao do Mato Dentro, located in the interior of Minas Gerais, is the ideal environment for mountain biking in all its aspects.

As for its location, Conceicao do Mato Dentro is 166 kilometers from Belo Horizonte. With more than three acronyms, the municipality has an immense preserved historical and natural heritage, in addition to maintaining the characteristics of the interior and a rich religious tradition.

Full of natural beauty, the city forms part of the famous Serra do Espinhaço, cataloged by UNESCO in 2006 as a Biosphere Reserve, it also forms part of the Serra do Cipó National Circuit. Most of its territorial extension is a preserved green area, with rich vegetation, fauna, mountains and waterfalls.