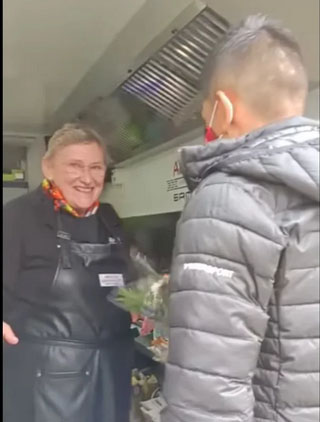 The Colombian cyclist Nairo Quintana has had a nice touch with the cook of his Arkea Samsic team, Françoise Deneckere, whom they consider within the team, a mother for them. That gesture has gone viral and shows that Quintana is a true leader.

A true leader of a cycling team, he doesn’t just have to think about the results and the road. He should not only be interested in being physically ready, mentally speaking; Apart from strategies and having a good environment, a leader must think of everyone.

Each member of the team is essential. The mechanic, the gregarious one, the communications one, the social media one, the assistant, the doctors, each one is part of a group that seeks the same objective, which is the good of the squad.

On this occasion, Nairo Quintana had great detail with the team’s cook, Françoise Deneckere. The Colombian went to the podium at the end of the ninth stage of the Tour de France, after having won the mountain shirt.

On the podium, Quintana and all those who go up there, receive a bouquet of roses, which are generally returned to the public or kept. But Nairo had an impeccable detail with the cook, as she gave him this bouquet along with a kiss.

The moment was recorded in this video: